The back squat is cool. But have you ever jumped with the barbell on your back? The benefits of the barbell jump squat are extraordinary and is one of the very few exercises that allow you to get airborne with heavy loads.

The barbell jump squat is performed like a vertical jump but with a barbell on your back. It develops lower body strength, power, and force development and even increases muscle mass.

If you want to know how the barbell jump squat achieves all of these benefits, then I’ve broken it all down for you below.

What Muscles Does The Barbell Jump Squat Work?

The barbell jump squat primarily works the muscles of the legs. That is, the quadriceps, hamstrings, glutes, and calves. Your trunk and upper back muscles are also used to support the barbell when jumping. However, these muscles are not the primary target or the exercise. 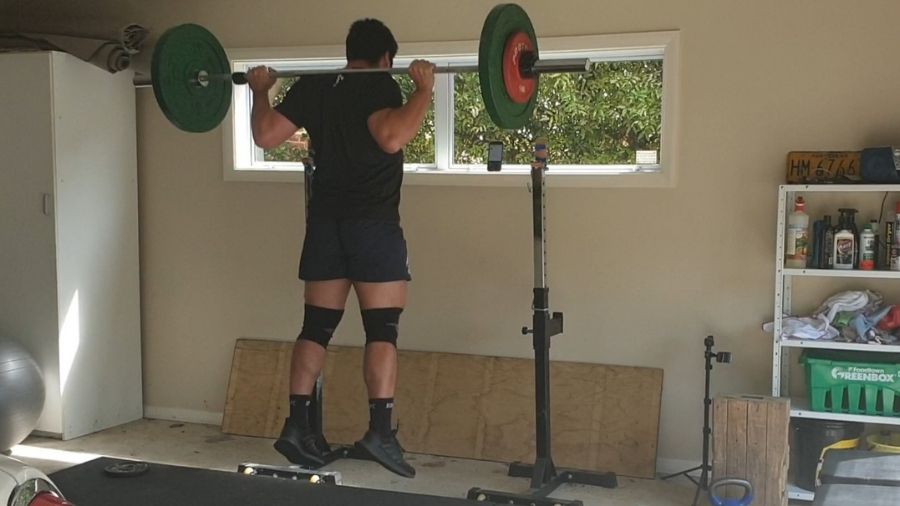 The benefits of the barbell jump squat are enormous. It is a staple exercise that I prescribe for athletic performance because of its versatility with loading.

You may not associate the barbell jump squat with building muscle mass. It is usually used as a power development exercise. But when jump squats are performed from a parallel depth at 30% back squat 1RM, we see similar improvements in quadriceps size compared to a back squat group using 75% and 90% 1RM [1].

While these were non-strength trained subjects, the barbell jump squat can potentially increase muscle mass.

Rate of force development (or RFD for short) is defined as producing force as quickly as possible. In many sports, there is a finite time to produce high levels of force. Think about jumping for a dunk in basketball or sprinting and changing direction in any field sport.

It has been shown that exercises of faster movement speeds (e.g., barbell jump squats) result in greater RFD compared to slower exercises [2].

This is highly important for sporting actions. Quickly producing force is related to several sporting movements such as jumping and sprinting [3].

The ability to produce force quickly is influenced by a key mechanism named rate coding. Rate coding is how fast the motor neurons can send signals to the muscle fibers to contract, known as discharge rates [4]. This is a trainable quality.

Barbell jump squats are an exercise that can train this quality. As it is a ballistic action, high initial discharge rates are seen. For example, when the muscles by the shin bone (tibialis anterior) are trained with rapid contractions using 30-40% of their maximal force, both RFD and discharge rate increase [4].

Interestingly, it has been suggested that the initial increase in force during explosive actions is constrained by the motor unit's ability to discharge these signals to the muscle fibers at high rates [4]. Considering that when motor units discharge their minimal rate, only 25% of the muscle's maximum force is exerted compared to when they discharge at peak rates [5].

This shows that if you want to improve the ability to produce force quickly, start using the barbell jump squat.

I will explain this in the easiest way to understand possible as this can be difficult to understand. The graph below illustrates the increase in force (y-axis) for a given change in muscle length (x-axis). 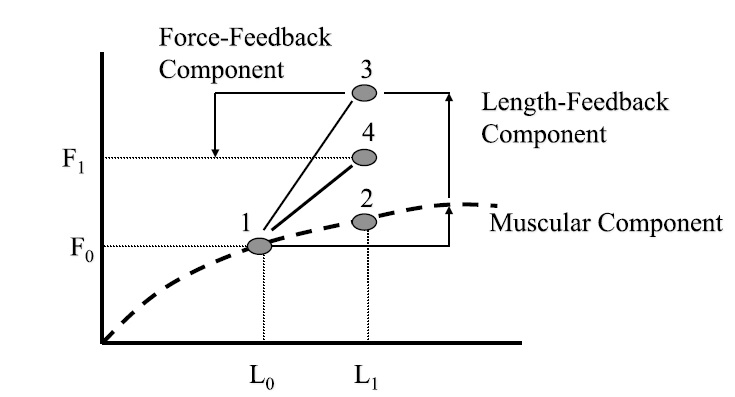 These muscle spindles are very sensitive to the rate of stretch (think plyometrics and various jumps) and are enhanced through these activities. However, the Golgi tendon organ does not like this and freaks out. The Golgi tendon organ is an inhibitory mechanism that pumps the brakes when it deems the force produced by the muscle is unsafe (force-feedback component).

Essentially, it’s protecting you from injury. That is where the arrow points from circle 3 to circle 4 for the final value of force produced. However, there are two things to know about the Golgi tendon organ. One, it kicks in far too early in those that are not trained.

For example, only the unloaded jump squat condition in untrained subjects maximized peak power output compared to four other external loads [6]. In comparison, peak power is usually maximized between 20-45% of back squat 1RM [7].

Illustrating how untrained subjects have a strong response to this inhibitory mechanism. Heavy strength training and plyometric training are ways to desensitize this mechanism, so circle 4 moves higher up the graph. Barbell jump squats are not technically considered plyometric. The ground contact time is too long, but the rapid change in stretch will still contribute.

The main benefit is the enhancement of the muscle spindles, where force production can be enhanced by exciting the muscle through jump squat power training. 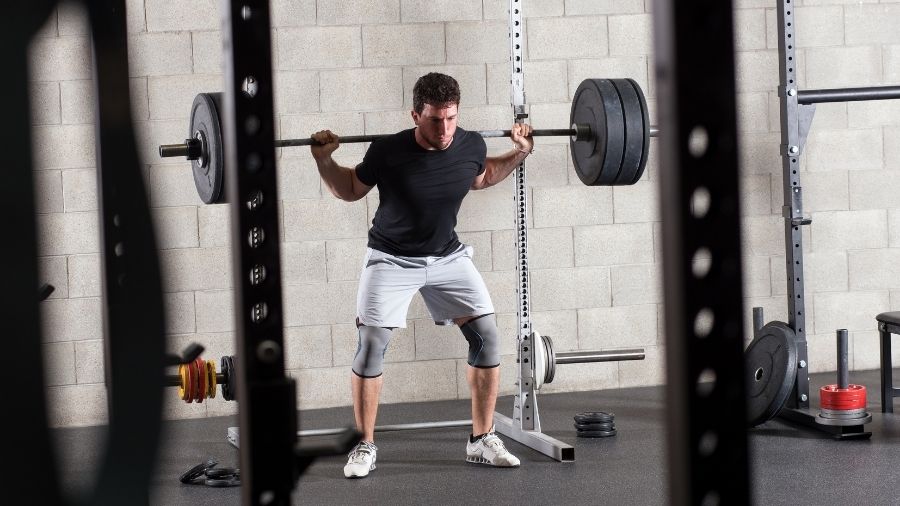 The jump squat vs. barbell squat debate is not a common one. Most lifters and athletes use both exercises for their benefit. But I'm going to detail which exercise may be better for different physical attributes.

I mentioned earlier in the article that parallel jump squats result in similar quadriceps size compared to the back squat [1].

There are potentially a few reasons for this surprising finding. Firstly, these were non-strength trained subjects. But even in non-strength training subjects, you may see some exercises are better than others. The short 8-week intervention may be one reason we see similar quadriceps gains.

Secondly, lifting heavy loads isn't the only way to maximize force production. If you remember introductory science class at school, force = mass x acceleration. Or F = M x A. Meaning you can either move heavy loads or light loads quickly. This may be another reason why we see similar increases in muscle mass.

This makes sense. Strength is heavily driven by intensity [8]. Lifting heavy is the most crucial factor for improving maximal strength.

Suppose we take the mechanistic changes from ballistic training (e.g., barbell squat jumping), such as enhanced rate coding and excitation of the muscle spindles. In that case, we could infer that vertical jump is likely to be improved as a performance metric.

If we break power down into its constituents, it is the product of force and velocity, which means power = strength x speed. Extrapolating this logically, improving either side of the power equation should increase power output. This is not always the case.

While strength and power are often associated, some athletes will not benefit from getting stronger. It has been determined that the imbalance from an athlete's actual and optimal force-velocity profile heavily influences vertical jump performance and maximal power [11]. The vertical jump is an excellent indicator of lower body power. 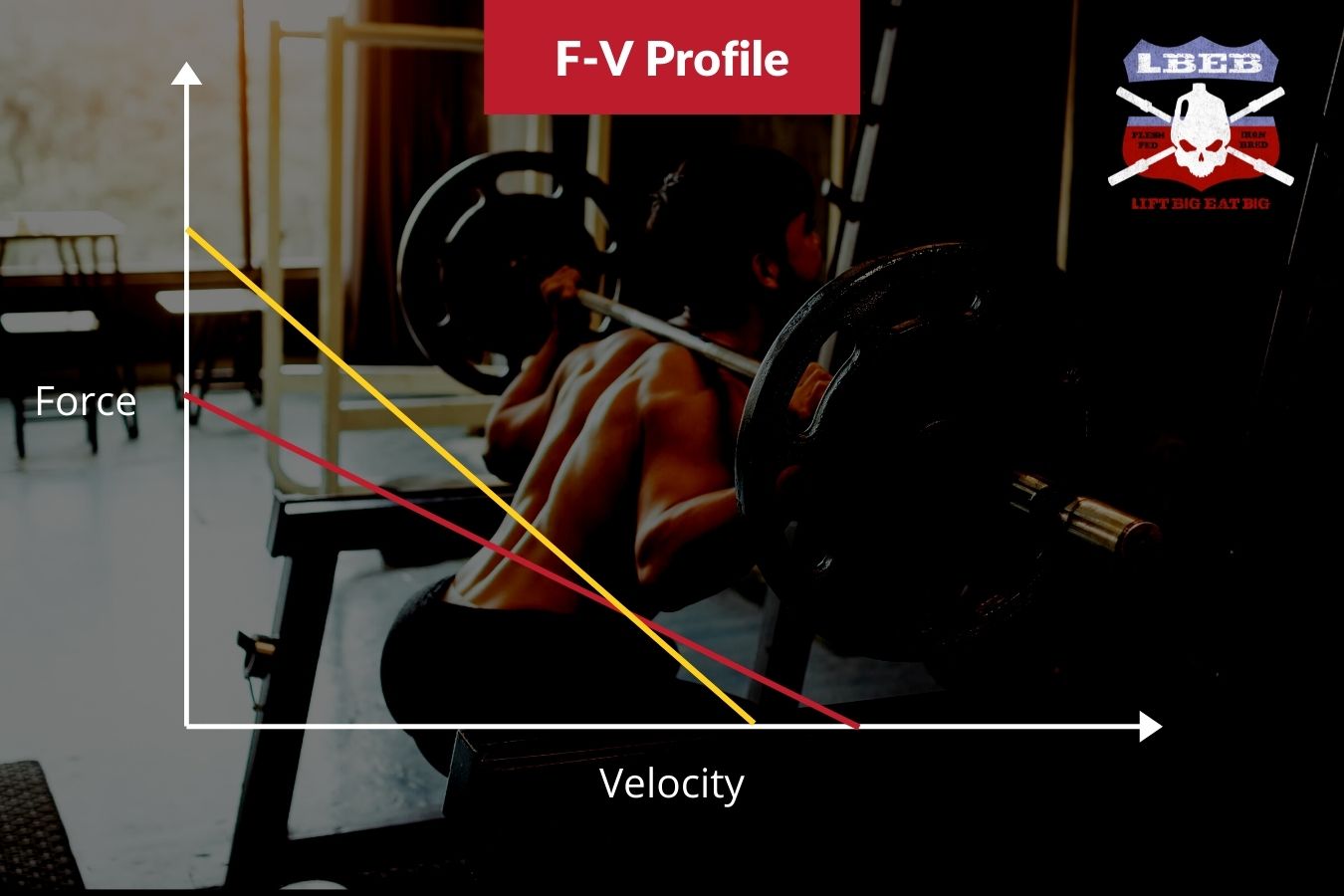 The above picture illustrates an athlete’s actual vs. optimal force-velocity profile. The yellow line indicates the athlete's actual profile, while the red line represents the optimal profile. To get more powerful and jump higher, this athlete is already strong but lacks speed.

Lightly loaded barbell jump squats would be the best exercise this athlete could do. Heavy squats will create a considerable imbalance between these two lines, potentially diminishing vertical jump ability.

If these lines were swapped where the red line was the actual profile, then heavy squats and even heavy barbell jump squats would be the best exercise choices. So, both of these exercises are great for power development.

How To Do The Barbell Jump Squat

There is more than one way to perform the barbell jump squat. Either dipping to parallel or below or only dipping to a quarter squat position as you would when performing a vertical jump. I will only cover the quarter squat variation as this is the most applicable when it comes to rate of force development and the transfer to sport.

Dip into a quarter squat position. If this is your first time performing the jump squat, descend slowly. As you become more comfortable, the descent can become rapid. 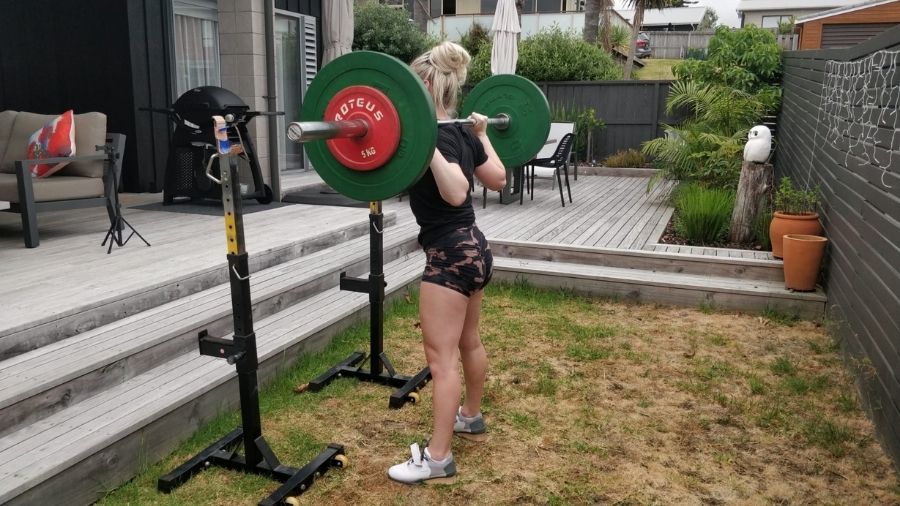 The faster you’re able to turn the descent into the ascent (eccentric to concentric), the better you will train the ability to produce force quickly. In the beginning, take your time. Push through your entire foot and drive with your legs as you do this. 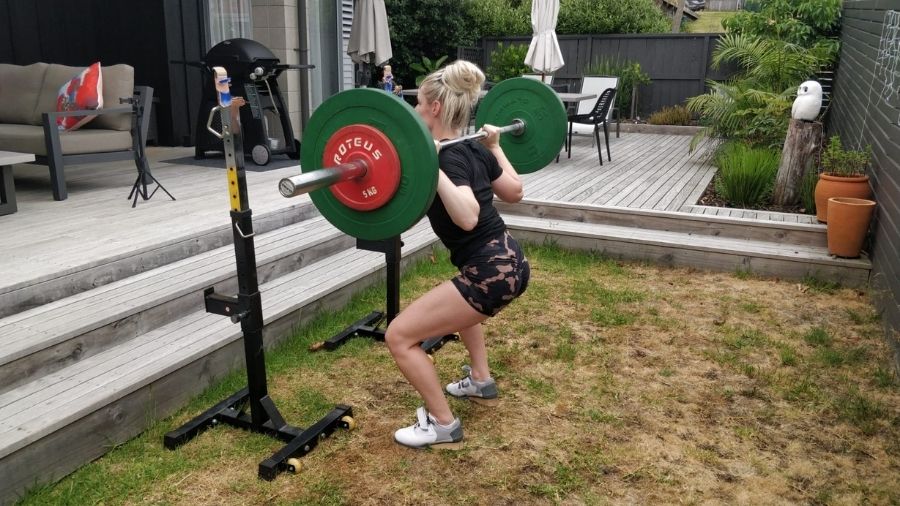 Continue driving with the legs and onto your toes. Keep the bar tight on your traps while you become airborne.

Absorb the impact when landing by slightly bending the knees. Don’t continuously jump. Land and reset so you can maximize each jump.

If you're looking to boost your athleticism and become an absolute powerhouse, then you need to use the barbell jump squat. There are too many benefits to not using it, ranging from increasing muscle mass, strength, and power development.

Weighted Chin-Ups: Benefits, Progression & How To