As an International level Weightlifter for the past 21 years, I can attest to the amazing benefits of the Olympic Weightlifting movements. It has helped me develop the muscle and mobility that I have now and continued to instill my love for lifting weights.

No other sport has grabbed my attention as Weightlifting has. The challenge is like no other. Before diving into the 7 amazing benefits of Olympic Weightlifting, I first need to define what Weightlifting is.

What Is Olympic Weightlifting?

Olympic Weightlifting is a sport that is graded by the total of two lifts:

Training for Olympic Weightlifting isn’t exclusive to these two lifts. You’ll train with variations and derivatives to train certain parts of each lift to increase your Weightlifting total. For example, power snatch, power clean, snatch pulls, clean pulls, and squats.

What Are The Benefits Of The Olympic Lifts?

Weightlifting exercises aren’t just used by competitive Olympic Weightlifters. They are used by athletes, CrossFitters, and even the weekend warrior will dabble in the lifts for some fun. So let’s dive into the 7 main benefits of performing the Olympic lifts. 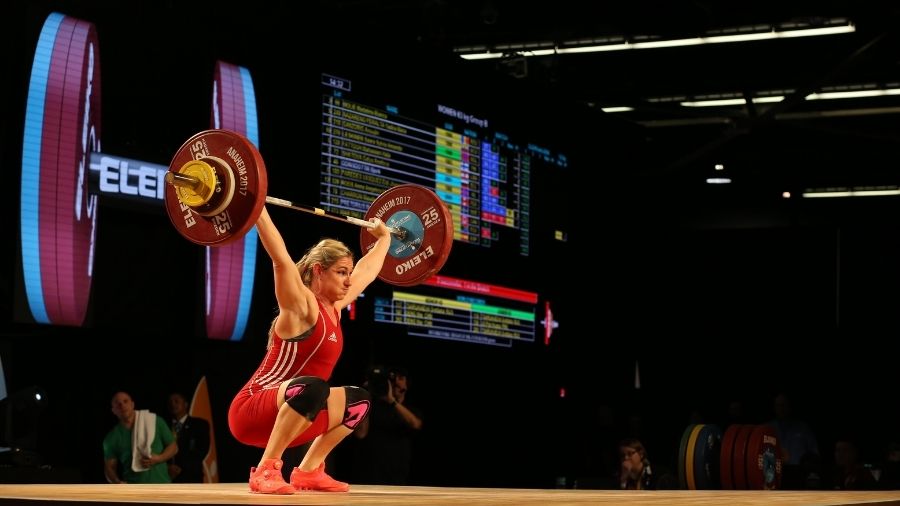 Do I need to say more? I don’t know anyone who has started Weightlifting or tried the snatch or clean & jerk and didn’t absolutely love the challenge. It provides a much different experience compared to traditional strength training.

While chasing strength or physique goals with traditional strength training is enjoyable, the Olympic lifts are a unique athletic challenge that you don’t usually get in the gym.

The Olympic lifts provide instant feedback with every rep which allows intrinsic learning. Meaning you can learn by feel. Did you lose the barbell in front in the catch position? That is feedback you can use to correct the next rep.

This is also known as knowledge of result and can be a powerful driver of performance. Many power-based exercises don’t provide intrinsic feedback. For example, a vertical jump unless you are jumping to touch something like a basketball rim or if you have a piece of equipment that can instantaneously measure jump height.

This video is an example of providing feedback to enhance jump performance. By knowing the jump height, you know if how you jumped was the right strategy. The Olympic lifts do this inherently by whether you catch or miss.

Not everything can be fixed intrinsically, however. Often, you’ll need a coach’s eye to pick up incorrect movements that you may not feel when lifting. Because the lifts are so fast, you may not feel if you are fully extending at the top of the pull or if your set position is correct.

A Skill You Will Never Master

This sounds like a disadvantage but in my eyes, it is a huge positive. Why? Because you’ll always be hungry to get better at the lifts. There is always some technical piece you are missing and need to fix. It doesn’t matter what level you compete, there will be something.

Often, one lift will be going very well such as the snatch. And the other lift you just can’t find the groove. This is what will keep you pushing and training to become more technically proficient at the snatch and clean & jerk.

Have you seen a competitive Weightlifters back? There’s a reason they have some of the biggest backs in strength sports. They literally handle heavy loads from the floor six or more times a week. This generates insane time under tension and volume on the back muscles sparking growth you won't find within a bodybuilding-style program.

There's a different look when you see a Weightlifters back and a physique athlete. The Weightlifter possesses a powerful look. Their back looks dense. With massive upper traps.

Physique athletes just don’t have that dense look. This likely comes down to the intense erector spinae development in Weightlifters which can only be built by pulling heavy loads off the floor weekly. 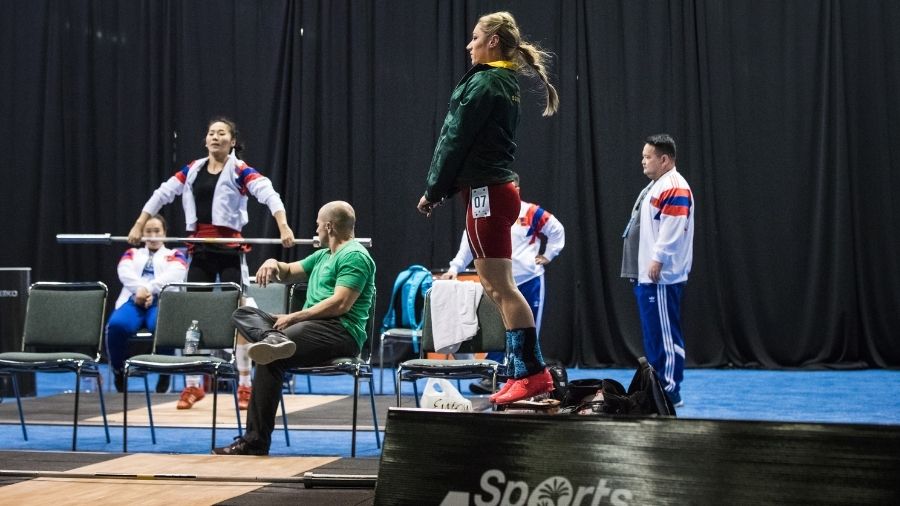 It’s no secret that Olympic Weightlifting develops crazy speed and power. In fact, Weightlifting may be even more effective than traditional strength training for improving vertical jump shown [1]. Jumping isn’t the only benefit. Weightlifting can also enhance 10 m sprint speed [2]. Especially when compared to a Powerlifting style program [3].

Mobility is probably the last thing on your mind when heading to the gym. You just want to lift some weights! May as well do some Weightlifting.

Weightlifting is essentially yoga with a barbell.

Stretching will only get you so far. Stretching will develop passive flexibility but will not provide the strength at the end ranges of motion meaning your brain hasn’t registered these new ranges as safe. That is why your flexibility training doesn’t often stick.

For example, when comparing stretching vs. strength training only, both groups improved hamstring and hip flexor range of motion equally but the strength group also improved quadriceps and hamstrings strength [4].

So instead of spending 20 minutes static stretching, spend 20 minutes with the barbell performing hang muscle cleans, front squats, and overhead squats to improve the mobility of your hips, ankles, and shoulders.

While you can definitely help prepare yourself for these movements through various front rack mobility exercises, nothing will improve your mobility for Weightlifting than spending more time in these positions.

It seems that the better Weightlifter you are, and the longer you spend performing the lifts (years), the greater percentage of Type IIA muscle fibers you may have [6].

Luckily for us, explosive power isn’t solely influenced by muscle fiber type but a wide array of neural adaptations which you get from Weightlifting training.

Another common myth is that Weightlifting is dangerous and has a high injury rate. This is simply not true and this table below proves it [10]. 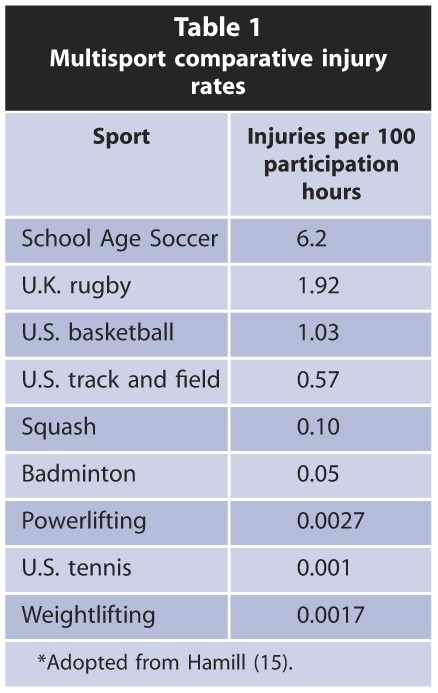 The fact that Weightlifting has an injury rate even lower than non-contact sports like badminton and tennis says it all.

What Are The Disadvantages Of Olympic Lifting?

As with all sports and activities, there are always some downsides. To be objective of Weightlifting, here are the three main disadvantages of Olympic Weightlifting.

Being difficult to learn, while a benefit for those who are driven to learn, may steer lifters away because of their complexity. This complexity means you need a Weightlifting coach which can be an extra expense as well as taking extra time.

Further, not every city has a great Weightlifting coach and facility. If that is the case, you can check out the online programming from my RAWR Weightlifting program with Lift Big Eat Big.

The difficulty to learn can also be a disadvantage to other sporting athletes who may have short pre-seasons and need to gain as much strength and power as quickly as possible. Learning the lifts from scratch with a barbell won’t develop these qualities as well as jumps, plyometrics, and throws.

If you have a history of knee problems, then Weightlifting might not be for you. Almost every session involves you getting into a squat position with load. And the impact from moving your feet, landing, and then bracing when performing powers or snatches and cleans can aggravate any old knee problems.

Requires Mobility To Get Into The Positions

Being very stiff will make Weightlifting difficult. While yoga with the barbell will eventually get you there, it will take more than two sessions a week to see significant mobility change. Therefore, you may have to work on your mobility outside of training to get into the right positions which is more time potentially away from other forms of strength training.

Is Olympic Weightlifting Good For You?

When all is said and done, Olympic Weightlifting is great for you and a great form of exercise. We know strength training is important for many different lifestyle factors and retaining muscle mass is vitally important as we age.

Weightlifting is a fun, challenging way to improve your quality of life and strengthening areas of your body that get weaker from long periods of sitting.

We have detailed exactly how to build muscle with Weightlifting including a program that you can run in our “Does Olympic Weightlifting Build Muscle?” article.

Can You Get Ripped Doing Olympic Weightlifting?

Getting ripped or shredded comes down to maintaining as much muscle mass as possible while reducing body fat through dietary modifications. In a sense, Olympic Weightlifting can help you get there especially if you place a lot of emphasis on pulls, squats, and presses to retain as much muscle as possible.

Does Olympic Lifting Benefit Every Sport?

Sports that require manipulating other human beings (rugby, wrestling, American football, etc) benefit the most from Olympic lifting as you need to be able to move heavy loads quickly. That doesn’t mean you have to use them for those sports. But they can be great additions to a training program.

For sports like racket sports or non-contact sports, Olympic Weightlifting can be used to develop general strength and power. However, other forms of power training may be just as effective if not more effective for maximizing power development.

What Are Olympic Lifts?