If you admire how the world's super athletes are dunking over each other, making leaping one-hand catches, and displaying unreal feats of power, the French Contrast method may be your ticket to these athletic feats.

If you’re wondering how the French Contrast came about and how it can benefit your training, then I’ve broken everything down for you below!

What Is French Contrast Training?

French Contrast training was created by American track coach Gilles Cometti but was developed into a mainstream method by Cal Dietz and Ben Peterson in their book "Triphasic Training." It involves performing four exercises within one set that target different parts of the force-velocity spectrum. Here is how it looks: 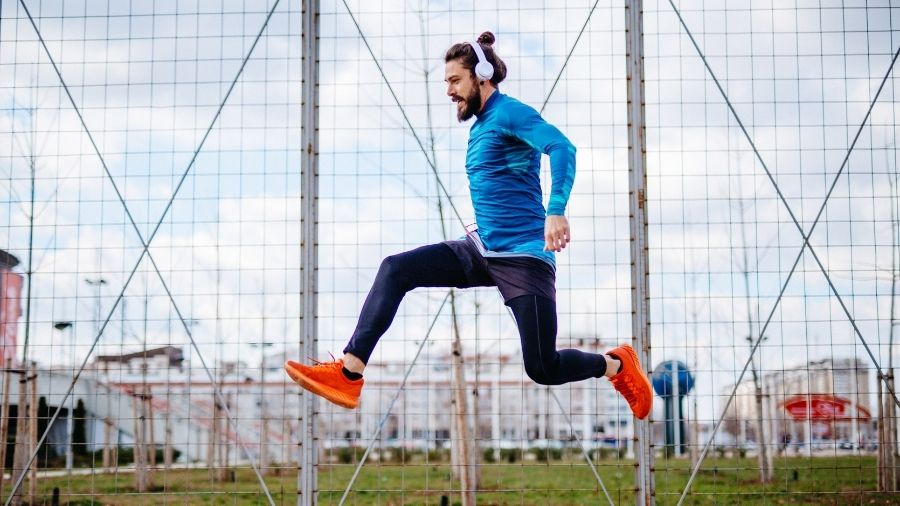 Post activation potentiation, known as PAP for short, is a phenomenon where performing a preconditioning exercise enhances the performance of the following exercise [1]. Usually, this is done in the form of complex training.

A complex is a heavy strength exercise (e.g., squat) followed by a power-based exercise (e.g., box jump). The idea is that the heavy squat will potentiate the box jump so that you can jump higher.

The exact mechanism behind this is still under debate. Still, a couple of theories exist, such as enhancing the sensitivity of the actin and myosin to calcium (this is how muscles contract) [2] and the preconditioning exercise forming a neural imprint.

That is, lifting something heavy, your brain taking the memory of how much force is needed to generate to move that weight. Then carry it over to the power-based exercise with little to no load.

While it is yet to be seen if French Contrast training is superior to complex training, one study had recreational athletes perform the following French Contrast before testing its effect on vertical jump [3]:

5-minutes following the French Contrast, subjects performed a vertical jump. This was done for three total sets. Vertical jump improved by 5% after the first set, 7% after the second set, and 8.5% after the third set compared to baseline.

Safe to say, French Contrast training may be a great way to potentiate subsequent exercise.

Athletes that are required to be strong, fast, and powerful can’t just perform heavy strength training or light power training. They need to be able to move all loads quickly, which is why training programs for these athletes will consist of fast exercises such as plyometrics and heavy exercises such as squats.

The French Contrast method trains the entire force-velocity spectrum within one training method. Once you’ve completed your sets, you’ve touched on everything you need to in training.

While not published or peer-reviewed, weight-trained males improved squat and deadlift strength and jump performance [5]. Bear in mind there was also no control group.

Suppose you're short on time, and your number one goal is being a powerhouse and increasing athletic performance. In that case, French Contrast training can save you a lot of time while giving you almost everything you need.

3-4 sets of a French Contrast are enough to give you an intense stimulus to make gains.

By making a subtle change to exercise selection, you focus on speed development instead of vertical jump. Here is one I have used with professional rugby players:

The idea is to orientate exercises horizontally as much as possible to maximize transfer to sprinting. But speed isn’t just about linear movement. Team sport athletes need to be fast-changing direction too. This is another French Contrast I have used for lateral movement:

When doing a lateral French Contrast, only do one leg at a time. You will gas yourself out doing both legs in one set. To complete one full set with one leg, rest, then complete the next set with the other leg.

I wanted to give this example to show that you can make French Contrasts sport-specific. This particular contrast is for the tight five in rugby. That is, the props, hooker, and locks. While this technically isn’t a French Contrast, it’s not far off and provides a similar stimulus.

It's an excellent contrast and valuable for developing strength and speed in those positions.

French Contrast training works. However, it shouldn't be used by novice athletes or athletes that can still make easy gains with traditional training methods. Think of the French Contrast as your intensity modifier that you want to play if you have a short preparation period for competition or an advanced athlete who needs a stronger signal to adapt.