10 Superior Ways To Increase Your Squat

If you want to build total-body strength, a dense physique, become more athletic and turn those twig legs into bulging tree trunks, then the squat is your answer. It is even considered the king of strength and rivals the almighty deadlift for the number one spot.

But if your squat is stuck and hasn’t moved for months, it’s time to learn some tips and tricks that will send your squat soaring to new heights.

10 Ways To Increase Your Squat

While the squat is a technical lift, there are many non-technical ways to blast your squat numbers into orbit. So here are 10 of them!

Don’t be like that guy ego lifting 5 plate shallow knee bends. It’s not going to get you stronger. For starters, it seems that squat depth and not load is responsible for increasing the relative muscular effort of the quadriceps [1].

Because the squat is a multi-joint exercise, many muscles are involved in the movement. Therefore, at a given load, muscles will generally work at a lower relative intensity. By squatting deeper, you increase the work from the quadriceps which are vital prime movers for the squat.

Both squat depth and load increase the relative muscular effort of the glutes [1]. More effort required from these muscles equals more strength being developed. Not to mention that squatting deeper places less stress on your knees and spine compared to half and quarter squats with the highest knee compressive forces seen at 90° knee angle [2].

Finally, the strength developed by deep squats transfers to all ranges of motion so if you get stronger deep squatting, you will also get significantly stronger shallow squatting [3]. Moral of the story? Bury your squats.

If you are a competitive Powerlifter, making sure your hip crease is below your knees in training is a good habit to have going into your competitions. 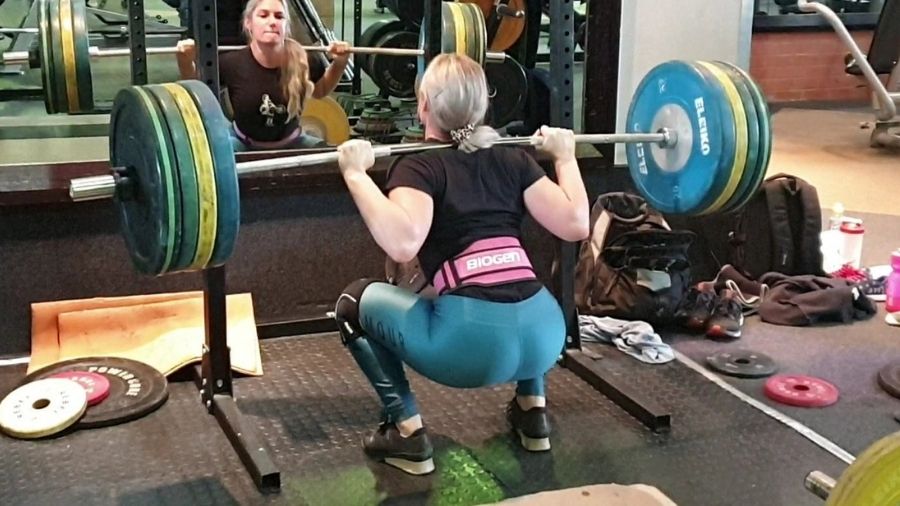 Paused squats are brutal. Is sitting in the bottom of the squat for 3 seconds with heavy loads really 3 seconds? It feels more like 10. But the harder the exercise, the more you’ll get out of it. A regular squat allows you to bounce out of the hole so you can take advantage of the elastic energy you’ve created on the descent.

There is nothing wrong with this and it will help you handle heavier loads. But every so often, it is great to squat without the aid of elastic energy contribution. Elastic energy comes from the stretch-shortening cycle (SSC for short).

This SSC stores energy in the tendon so when you perform rapidly changing eccentric (lowering) to concentric (upward) actions, you get a boost of extra force production on top of your muscular force production.

By pausing at the bottom of the rep, this elastic energy dissipates. No longer do you have this elastic energy to rely on. Only raw force production from your muscles. Because of this, you won’t be able to squat as much weight. But you’ll force your muscles to do more work and therefore, develop high levels of muscular strength in your legs.

If you never want to get stuck at the bottom of a squat again, then Anderson squats need to be part of your program. These were named after legendary lifter Paul Anderson who dug a hole in his backyard so he could do partial squats with his makeshift bar attached to barrels.

Each rep starts from a dead stop position. These are infinitely harder than the pause squat. With the pause squat, you get to feel the weight on the way down to the bottom. Even though you pause, you still store some elastic energy.

With the Anderson squat, you have no such luck. It's pure horsepower from the beginning as you position yourself under the bar ready to push as hard as you can to get it moving.

You can perform these from any position in the rack. The top half would be considered an overload movement as you’ll be able to handle more than your 1RM squat. I love squatting from the very bottom position. Put yourself in the most difficult position possible to see what you’re made of.

You must create as much full-body tension against the bar as possible. Don't push from a relaxed state. Your lower back will hate you for it. 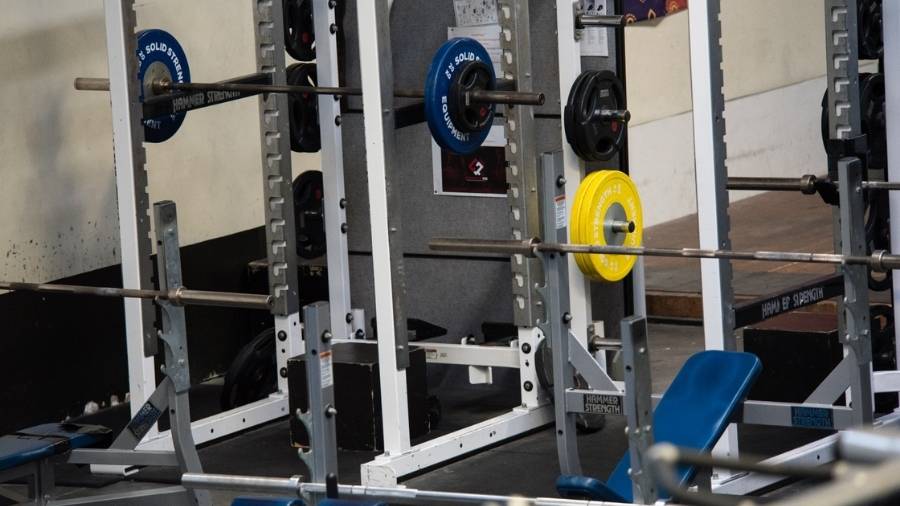 When you want to prioritize a certain lift or body part, you train it first in your workout and you train it often. The squat is no different. You should be squatting at least twice a week if your goal is to squat more weight.

Each workout should start with a squat variation. Not every workout needs to be your competition-style back squat. Some can be front squats, low bar, high bar, etc. Variation is great to keep you away from overuse injuries and to keep you fresh.

There are programs out there like squat every day. When done properly, these are awesome. I would highly recommend reading Matt Perryman’s book Squat Every Day.

Accelerate The Bar As Fast As Possible

Force is more than putting weight on the bar. The force equation is mass x acceleration. Meaning increasing either side will increase force output. That is why you want to try to accelerate the bar as fast as possible regardless of the load you are lifting.

Obviously, how quickly you move the bar will be limited by load due to the relationship between force and velocity. That is the greater the force, the slower the velocity. However, it is the intention that counts and is often called compensatory acceleration training.

This method was made popular by Dr. Squat (aka Dr. Fred Hatfield) and is how he squatted over 1000 pounds! This one little change can dramatically benefit your squat weights.

Jump Your Way To A Big Squat

While moving heavy loads quickly is one way to increase the acceleration side of the force equation, you are limited by having to decelerate the bar near the end range of motion. Jumping has the opposite effect and allows you to accelerate through the entire range of motion so you can get airborne.

Further, performing jump squats at 30% 1RM of back squat and no-load twice per week for 8 weeks improved 1RM back squat by approximately 20% [4].

One day a week of heavy squats and a second day of jump squats at 30% 1RM can be a potent squat combination.

Build Your Quads With Accessory Exercises

Building big quads is going to help you squat massive weights. While muscle mass isn't everything to strength, it does help. Further, do you want to walk around with chicken legs even if you can squat 500 lbs?

Me neither. So, after you’ve finished your squat sets, head to the leg press or hack squat and pump out some reps. It’s much easier to recover from sets of 10-20 reps on these machines than it is from an exercise like the squat.

You don’t need to support heavy loads on your back leading to lower overall fatigue. Don't forget your single-leg movements too like walking lunges and Bulgarian split squats. All of these movements will strengthen and grow your quads.

It’s near impossible to get all the volume you need to get stronger by just squatting and still recover for the next session.

Since there is a dose-response relationship between volume and strength development (i.e. more volume to a certain extent equals more strength), it's important to make up the volume through these accessory exercises that don't cause the same full-body fatigue as squatting [5].

Don’t Neglect Your Glutes And Lower Back 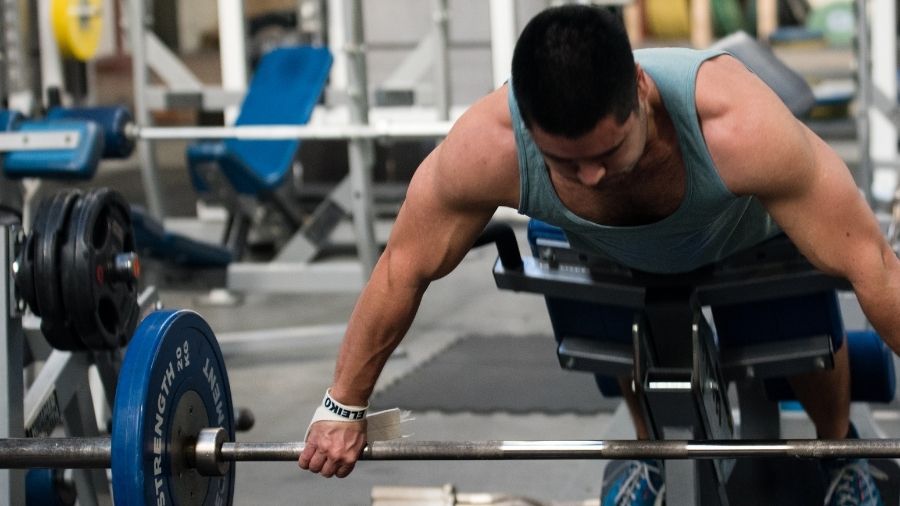 Squats heavily tax your glutes and lower back. It’s not just a quadriceps movement. Strong glutes will help keep your knees tracking in line with your toes and help you push big weights from the bottom position.

The lower back is part of your key postural muscles that will allow you to handle these heavy loads on your back. Exercises like hip thrusts are great for your glutes but don't tax the lower back like other movements.

I would recommend exercises like back extensions and Romanian deadlifts to strengthen your glutes and lower back simultaneously.

If you’re squatting in running shoes, stop. Those cushion soles may be good for absorbing impact from the road when running, but it’s not good for keeping you stable under heavy loads when squatting. Opt for proper Weightlifting shoes.

Weightlifting shoes provide a hard sole so you are squatting on a stable surface. Further, they have an elevated heel which allows you to squat deeper without needing a lot of ankle mobility. This allows you to stay more upright and load the quads.

You’ll instantly feel a difference between your running shoes and Weightlifting shoes.

Olympic Weightlifters have some of the biggest squats in the world relative to their bodyweight. One thing you’ll notice is how narrowly they grip the bar when it is on their back. If you want bodybuilders or even some Powerlifters squat, you’ll often see a very wide grip used.

The narrower grip allows you to get tighter under the bar. I feel a huge difference in overall tension and the ability to handle heavy weights when I have my hands tight and narrow compared to wide. It’s night and day.

7 Week Program To Increase Your Squat

This squat program is designed to blast you through any squat plateaus. You’ll squat three times per week with two back squat sessions and one front squat session. After you squat, you can perform any accessory exercises you like. Ideally, you want to leave the squatting movements alone and focus on the glutes and hamstrings as well as the upper body.

Here is a two-week preview of the squat program and you can purchase the rest of the 5 weeks in an easy-to-use spreadsheet for $9. This spreadsheet will automatically calculate your working weights based on your back squat and front squat maxes you enter.

Blast Through Your Squat Plateau

Blast Through Your Squat Plateau