How To Snatch: Complete Technique Guide

The snatch is an impressive sight to watch as the smooth, effortless movement of the bar goes from the floor to overhead. It is considered one of the most technical exercises in any strength sport.

The snatch is one of the two competition lifts in the sport of Olympic Weightlifting, where the bar moves from the floor to overhead in one motion. It elicits high levels of force, speed, and power.

Seems straightforward. Get the bar overhead in one movement. But the technique will make or break this lift, and minute changes in the movement pattern can result in missing a snatch. So here's how to perform the snatch from the fingers to the toes. 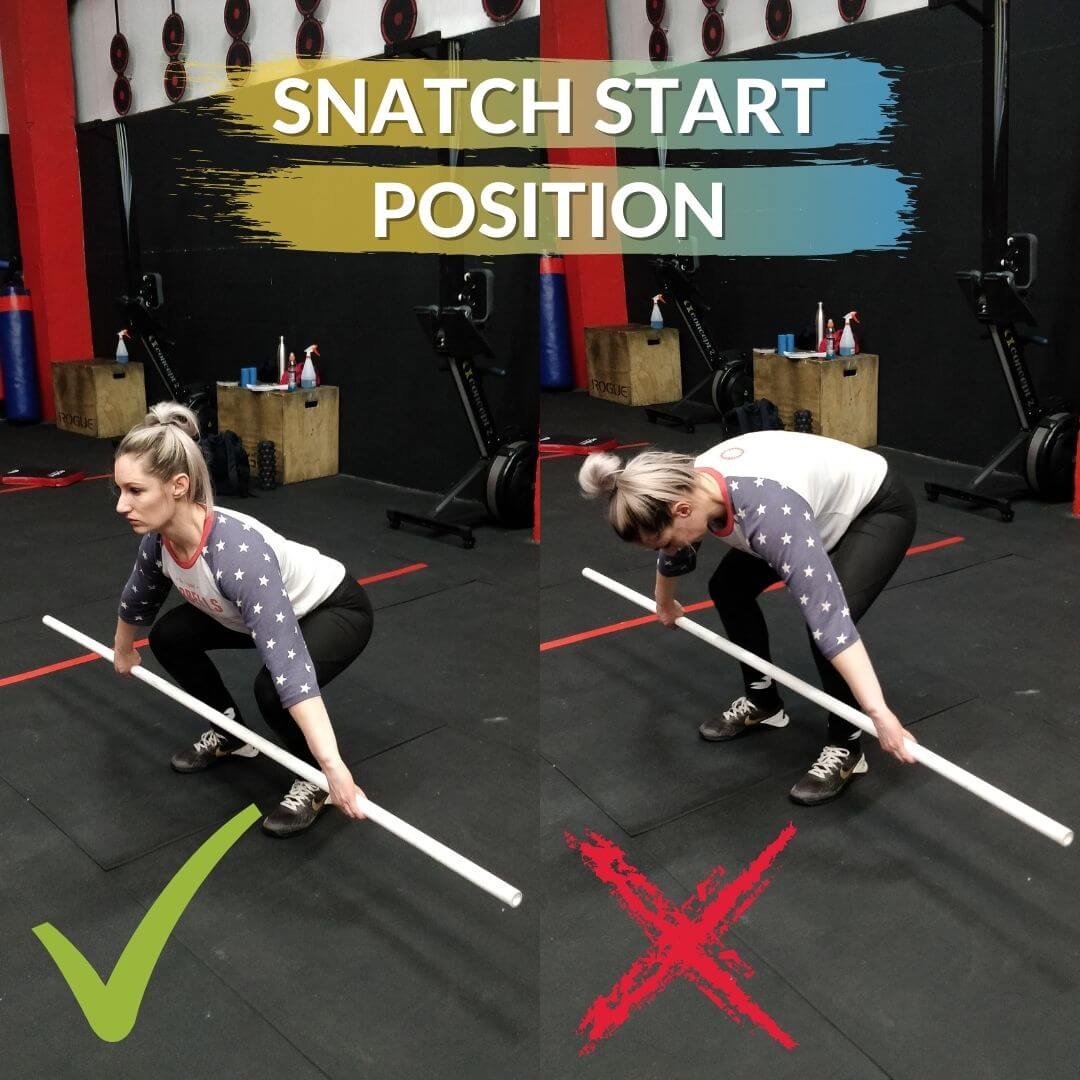 Start by hook gripping the bar at your usual snatch grip width. Pull yourself into position so the barbell rests close to or lightly against your shins. You must pull the slack out of the bar, which is the movement of the bar before the plates come off the floor.

Your bodyweight will be centered in the middle of your feet, not toward your heels or toes. Maintain a big chest and tension in the lats by thinking of keeping a tennis ball under your armpits. This will ensure the bar stays close when you initiate the pull.

Point your elbows out towards the plates to ensure a straight bar path through the second pull. You need to find the right balance between keeping the hips high enough to maintain an over-the-bar position but low enough to allow you to push with the legs. 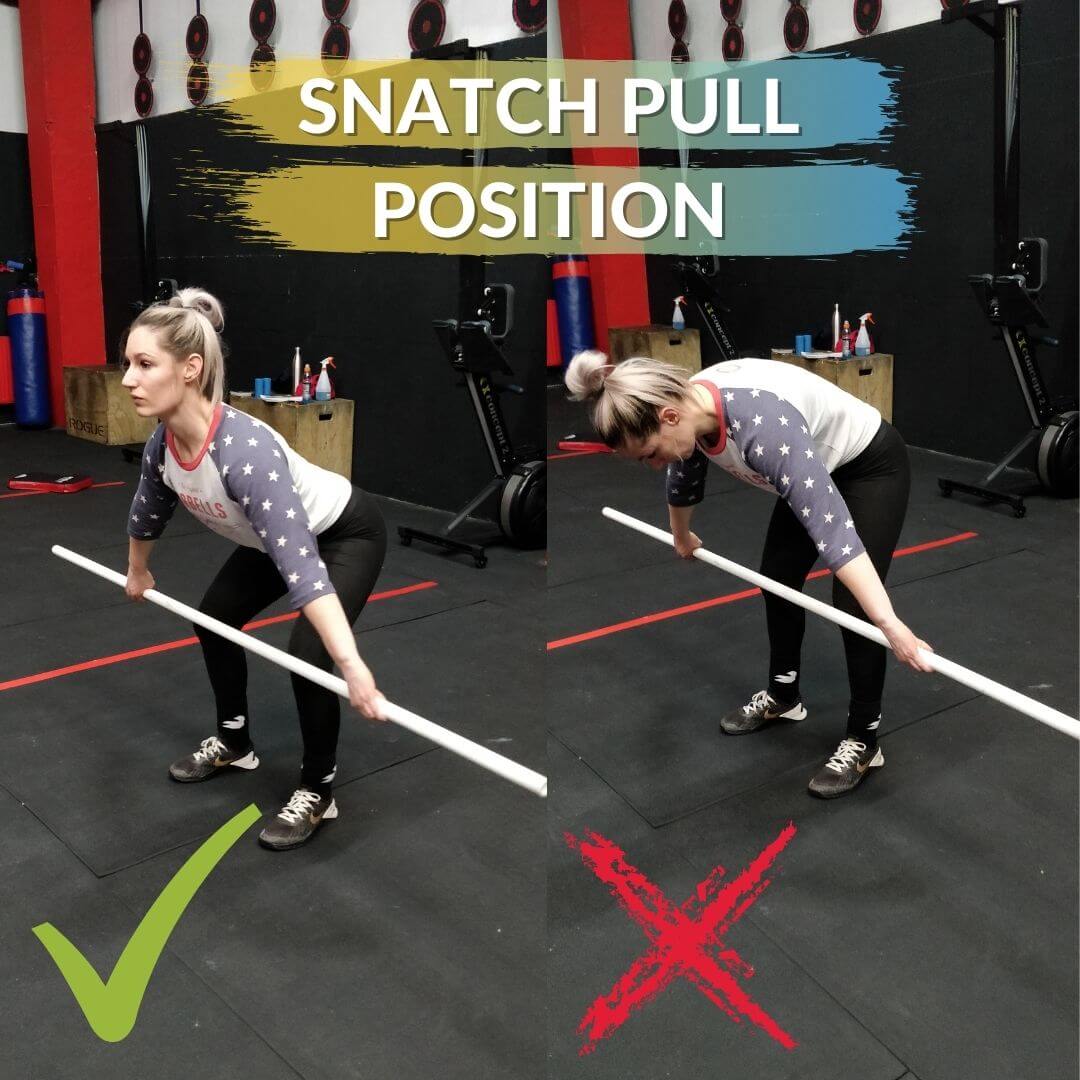 Initiating the pull starts with pushing with the legs. This ensures you stay over the bar. When pulling the bar from the floor to the knee, your goal is to keep your back angle the same. Essentially, the line from your hips to your shoulders should remain the same.

Once you pass the knee, start raising the shoulders and bringing the hips forward. You must maintain a big chest and tension in the lats to keep the bar close to your legs as you move toward a vertical torso. The movement from the knees to the hips is known as the second pull.

This is where the highest forces, speed, and power is displayed. Many athletes prioritize the hang variations over the full snatch [2,3]. As you accelerate, your hips will contact the barbell as you triple extend the ankle, knees, and hips simultaneously.

As you extend, perform a violent shrug of the traps and pull the bar as close to the body as possible as you would when doing a high pull or upright row. This is where the elbows pointing out becomes vital. 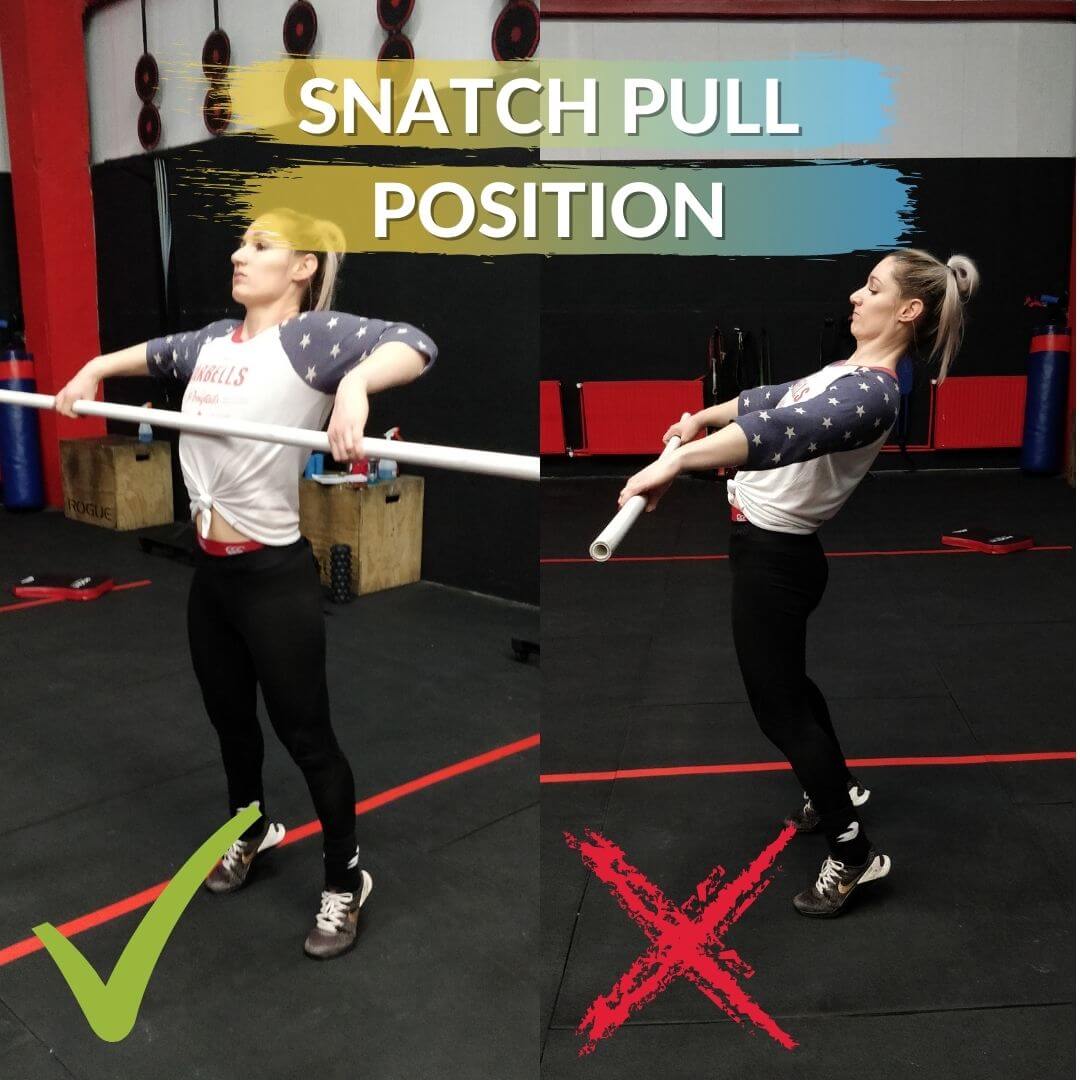 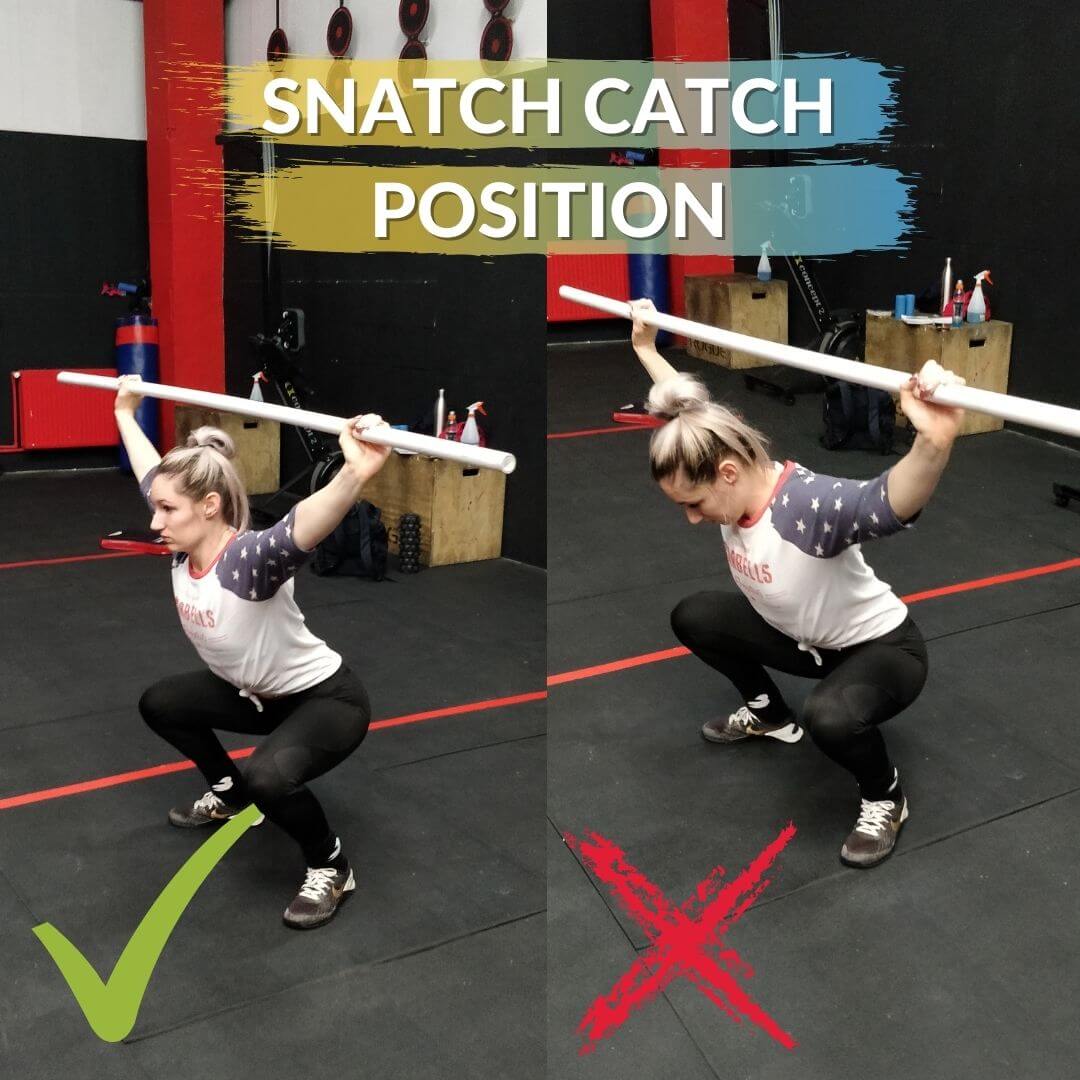 Continue pulling yourself under the bar. Your feet will move laterally so you can sit between your legs in the squat position. Block the bar overhead by pushing up against the bar. Your wrists can either be straight or extended. You should also maintain your hook grip.

Once stable in the bottom of the snatch, stand up before dropping the bar. Maintain your block against the bar as you stand up; otherwise, going soft can result in losing the bar in front.

Muscles Worked In The Snatch

The snatch is a full-body exercise that works almost every muscle. You'll work the calves, hamstrings, quads, and glutes in the lower body. As you move to the upper body, you’ve for the spinal erectors, lats, mid and upper back, traps, and shoulders.

It’s no secret that Weightlifters display insane levels of strength and power.

For example, elite Weightlifters produce the most power when jumping with loads up to 90% of squat 1RM than sprinters and elite Powerlifters [4].

When we analyze the snatch itself, it shows similar ground reaction forces to the vertical jump [5]. Further, peak power displayed during a vertical jump has been strongly associated with the snatch [6].

Safe to say, Weightlifting is an excellent tool for developing strength, speed, and power related to athletic performance tasks.

Drill The Complete Movement For Competition

As a Weightlifter, you will perform the snatch in competition and the clean and jerk. You can do all the snatch variations you want to work on weaknesses within the snatch. Still, nothing will prepare you for competition other than snatching.

If you are new to Olympic Weightlifting, the snatch is challenging to complete if you lack ankle, hip, thoracic, and shoulder mobility. But over time, as you load the end ranges of your flexibility, you will become more mobile. 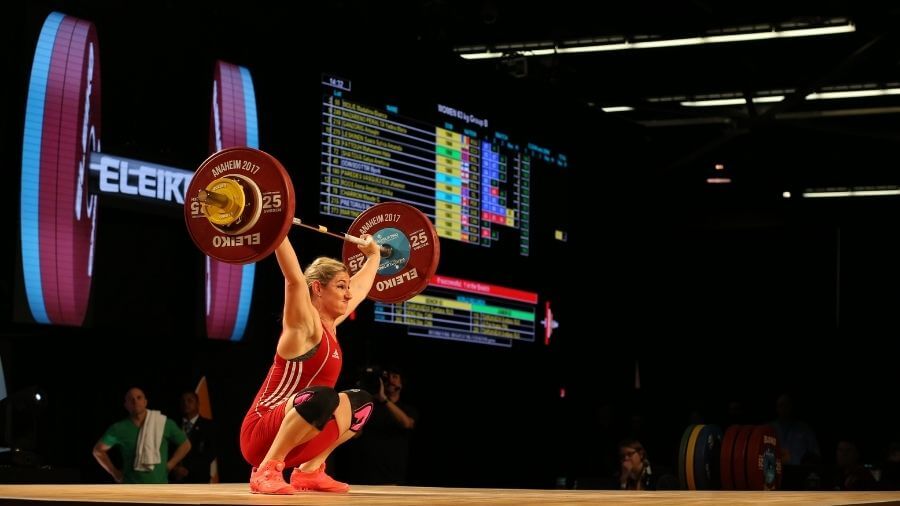 These are the common snatch mistakes from the floor to the overhead position.

Gripping The Bar Too Wide

When beginners snatch for the first time, their first instinct is often to grip the bar against the sleeves. This might be necessary if you are a large individual with a huge wingspan. But more often than not, it is far too wide.

Finding your snatch grip width is by standing tall and finding the position where the bar is in contact with the crease of your hips.

The most significant factor for a successful snatch is the direction of force application [1]. Specifically in the first pull from the floor to the knee. To minimize the horizontal movement of the barbell, you must push with the legs to maintain the same back angle.

When you pull with your back, your shoulders rise quickly, forcing the barbell forward, resulting in losing the line of pull. This cascades into issues for the rest of the snatch, potentially leading to a missed lift.

Not Staying Over The Bar

Following the pulling with the back mistake, raising the shoulders early puts your bodyweight behind the bar. The only way to accelerate the bar through the second pull is to lean further back, forcing the bar to move horizontally, leading to a looping bar.

Not staying over the bar also leads to another problem: not finishing the pull.

Not Completing The Pull

Many Weightlifters will make this mistake trying to move quickly under the bar. Instead of extending at the hips, knees, and ankles and pulling themselves under from a tall position, they make contact with the hips and dive under the bar without the full extension.

This will severely limit the weight you can lift and cause you to miss many lifts in front as you aren’t pulling under the bar.

Bouncing the bar off the hips can be a symptom of the above mistakes. But it also occurs even when the pull looks perfect. It's a mistake that is commonly taught as the correct technique. The hips should never bash the bar but instead, make contact and brush vertically.

Not Pulling Yourself Under The Bar

When Weightlifters don’t pull themselves under the bar, it floats as they dive into the hole. This is a recipe for losing the bar in front or for the bar crashing on you. Not a great way to treat your shoulders and arms over the long haul.

You want to think about pulling the barbell where you want it instead of getting under the bar as fast as possible.

When To Use The Snatch?

The snatch is used all year round since it is a main competition lift. However, there are some instances where the snatch may not be programmed. For example, after a competition, Weightlifters will often take a break from the snatch and use variations such as powers or lifting from the hang.

Beginners also won't snatch as they need to learn the snatch regressions first, such as the muscle snatch and other hang variations.

How Many Sets And Reps Of The Snatch?

Closer to competition, you will perform more singles at higher percentages and sometimes look to surpass your best 1RM. 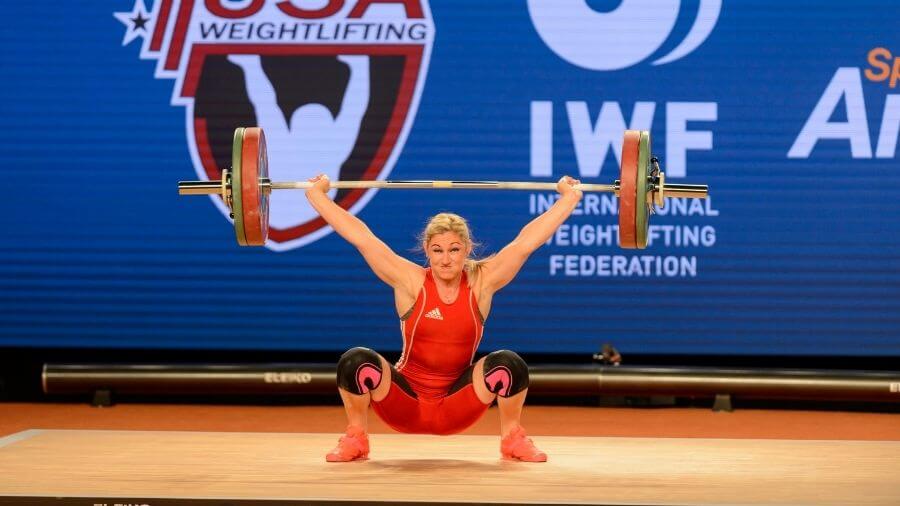 When training for the sport of Weightlifting, you are never going to snatch solely. Snatch variations can reinforce certain parts of the lift to improve your snatch. For athletes, snatch variations are often better for athletic development as they are easier to learn and emphasize the fastest or most powerful portions of the snatch.

As the name implies, the power snatch is powerful. Being a power means you catch the bar above the position where your thighs are parallel with the floor. In doing so, the bar travels further, and you catch the bar higher, resulting in faster speeds.

The power snatch is often used to reduce the loading within a session as the weights lifted are much lighter than a snatch.

The hang snatch emphasizes the second pull of the snatch. Instead of starting from the floor, you will begin from slightly above the knee. This reinforces and strengthens correct positioning that transfers to the snatch.

The muscle snatch serves two primary purposes—one to teach a beginner the bar path and general movement of the snatch. And two, as an accessory exercise to strengthen the upper body specifically for the snatch.

Snatching while standing on an elevated platform is known as a snatch from deficit. It increases the range of motion resulting in a longer pull. This exercise is often prescribed to force you to stay over the bar longer.

This transfers to the snatch, where the longer pull gives you the feeling of patience over the bar.

The tall snatch is prescribed to improve speed under the bar. It also reinforces the fully extended position at the end of the second pull so you can transfer that feeling to the snatch.

The no feet snatch isn’t as common as the other variations above. But it is often prescribed to reinforce finishing the pull and for Weightlifters that “donkey kick” their feet backward to reinforce proper mechanics.

There you have it—a complete guide to how to snatch for the Olympic Weightlifter or sporting athlete. The snatch is highly demanding on mobility but is great fun to learn. If you are an athlete, variations are better options. As a Weightlifter, you must perform the snatch. If you want an in-depth training system, check out the Weightlifting Mastery online course below!

Drop Snatch (Technique, How To & Benefits)