The power snatch is just like a snatch except the barbell is received with the thighs above parallel to the floor. Anything below this is considered a snatch.

To catch the weight above parallel, the Weightlifter must focus on pulling the bar with as much speed and power as possible while correctly timing the extension of the legs and catch of the bar.

How To Perform The Power Snatch

The power snatch starts by taking your snatch grip. The width of your grip will be determined by your body proportions. You’ll know you have the correct grip width when you can stand up tall and the bar sits against your hips with your arms straight, elbows pointing out, and with a big chest.

Once you have gripped the barbell, pull yourself into the starting position. The knees will be pointing slightly out so they don’t get in the way during the pull. Your hips will be slightly lower than you would when setting up for a clean.

Pull the slack out of the bar (the small movement that happens when you lightly pull the barbell up but the plates don't leave the ground) by pulling yourself into the set position while maintaining full-body tension.

Your elbows must be pointing out towards the plates to ensure a straight bar path while keeping a big chest. Your eyes should be looking up at a point slightly above eye level when you’re standing. Keep your lats tight by thinking about holding tennis balls under your armpits. 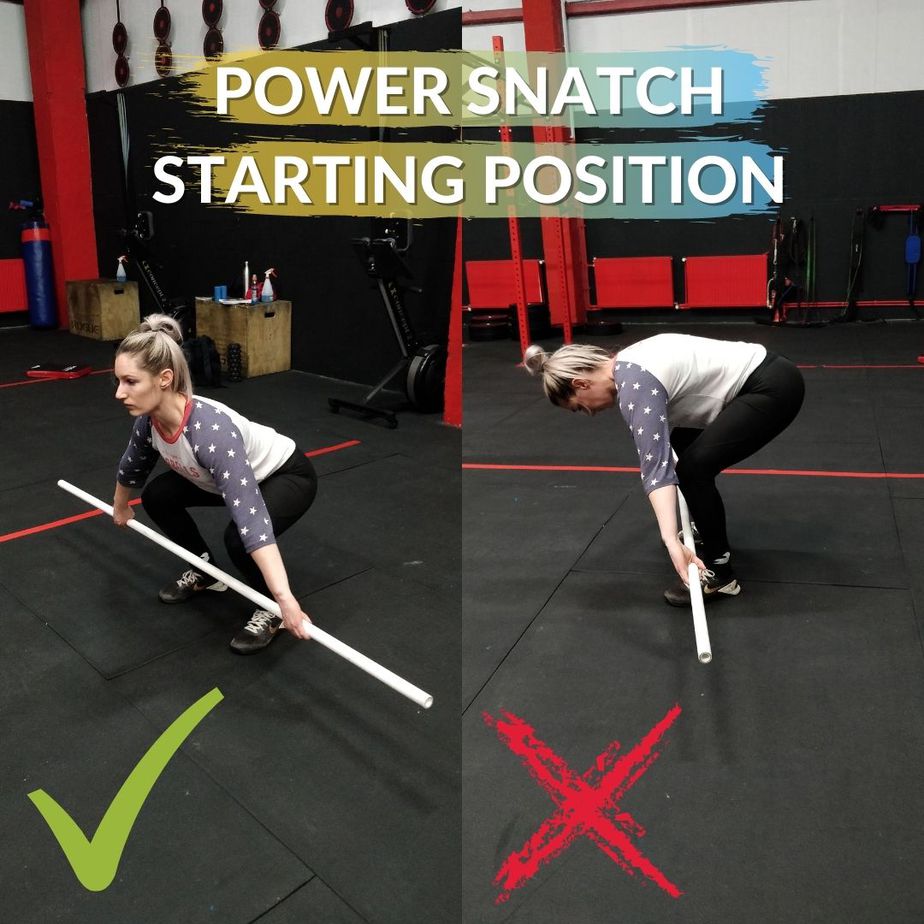 Initiate the pull by pushing with your legs. This will ensure your back stays at the same angle as your starting position. This is vitally important for maintaining a straight bar path. The knees will move slightly backward to make room for the barbell to move vertically.

Once the bar passes the knees, continue pushing with the legs while maintaining the same back angle for as long as possible. The bar should be accelerated from the knees. This is known as “staying over the bar.” Start to bring the shoulders up so you are in a vertical position. 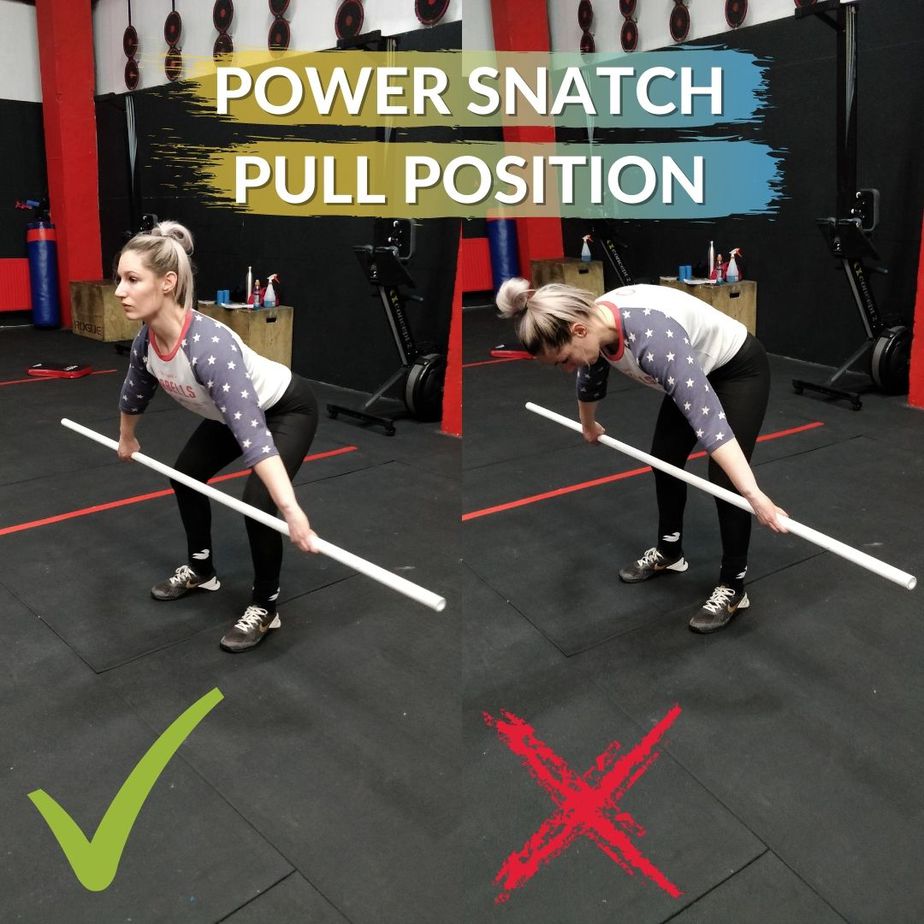 As the bar gets to the hip, maintain the tightness in the lats while making contact with the hips. As you make contact, extend the hips, knees, and ankles vertically and minimize any horizontal movement of the barbell.

Continue pulling the bar to the overhead position by keeping the barbell as close to the body as possible. This is why your elbows must face outward so the bar can move in a straight line vertically. 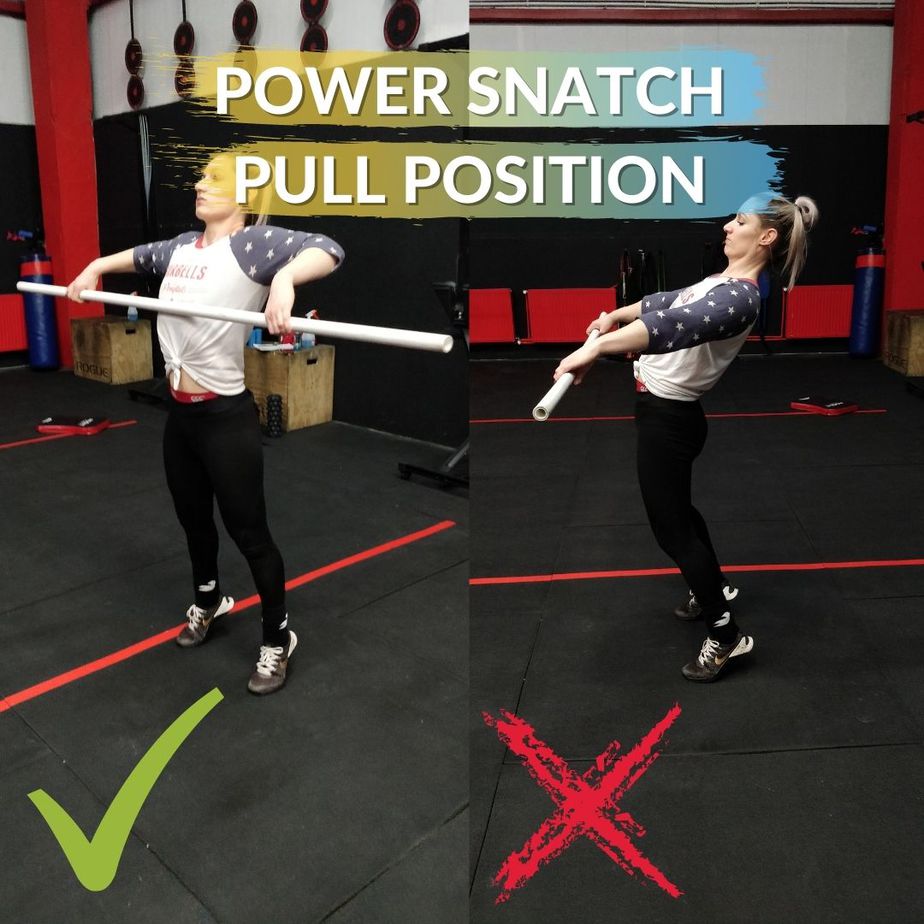 As the bar moves vertically overhead, you must pull yourself under the barbell while moving your feet outward. This movement of the feet should be exactly the same as the receiving position of your snatch.

To pull the bar to the catch position, it must be a solid punch overhead to ensure a straight and stiff arm with no movement of the elbows.

Your head should be pushed forward slightly with the bar behind the head which will lock the shoulders into position. 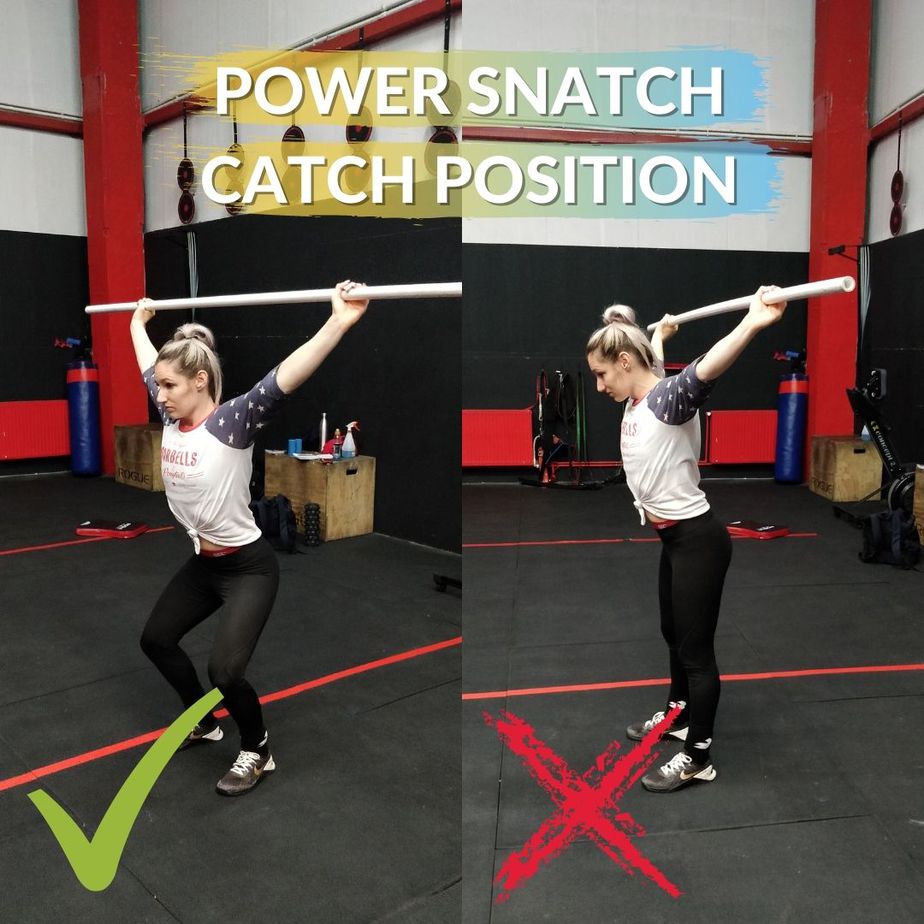 These common power snatch mistakes will be in sequential order from the starting position through to the catch.

Setting Up With Body Weight Towards The Heels

Having your body weight towards your heels is a common mistake especially by those with Powerlifting backgrounds.

Sitting back on the heels in the starting position causes you to be too upright while pulling the bar backward instead of straight up.

This results in a cascade of technical errors such as swinging the barbell around the knees, kicking the bar in front after contact with the hips, and diving forward to catch the bar.

Pulling With The Back First

I mentioned that you need to stay over the bar when performing the power snatch. When you pull with the back first, instead of pushing with the legs, you lose this over the bar position.

You end up with the shoulders behind the bar as your back angle starts to become vertical too early in the lift.

This creates an issue where the only way to get the final acceleration from the hip to overhead is to throw the shoulders and body backward to create momentum resulting in the bar being kicked out in front looping to the overhead position.

Remember when I mentioned pulling yourself into the starting position by pulling the slack out of the bar? When you yank the bar, the slack isn't taken up resulting in a small movement of the bar without the plates leaving the ground.

This changes your starting position causing your hips to shoot up first moving you out of position. But not removing the slack isn’t the only way Weightlifters yank the bar off the floor.

Taken from Powerlifting, “grip it and rip it” is a term used when pulling heavy deadlifts. However, the power snatch requires you to “squeeze” the bar off the ground. This is how you nail the rhythm of the lift.

It should go fast to the knee, faster to the hip, and fastest to the overhead position. Yanking the barbell off the floor alters this rhythm which often results in the same or similar tempo for the whole lift.

The hips should not violently crash into the bar as some coaches teach. This results in the bar being kicked out in front and looping overhead. You will either dive in front to catch it, lose the bar behind you, or severely limit the weight you can power snatch.

As the shoulders rise, the barbell will make contact with the hips as you extend your hips, knees, and ankles. Keeping the bar moving as vertically as possible is the key.

Dropping Under The Bar

Many Weightlifters miss the connection between the arms and the bar during the third pull (hip to catch position). What do I mean by missing the connection? To get the bar to the catch position, you must continue pulling yourself under the bar with the arms.

Some Weightlifters fall into the habit of making contact with the hips and then letting the bar float overhead.

This results in limiting the loads you can power snatch and can cause the barbell to crash down on you. The bar crashing down can put unnecessary stress on your wrists and can cause your elbows to re-bend.

Receiving Position Of The Feet Too Wide

Known as the starfish, some Weightlifters will catch the bar with their feet very wide so they can catch the bar as high as possible.

The point of the power snatch isn’t to catch it as high as possible (although this is a great outcome), it is to perform the lift exactly as you would the snatch to maximize the transfer of speed and power.

If the power snatch is too heavy, you should just drop into a snatch. Not create bad habits by moving your feet too wide.

Why Use The Power Snatch?

There’s no better way to develop these qualities than with an exercise that exactly replicates the snatch.

A Regression Of The Snatch

The snatch is a very complex movement. Teaching a beginner the power snatch allows them to learn the bar path of the snatch without having to worry about getting into the squat position with the bar overhead.

Reinforces Full Extension Of The Pull

Some Weightlifters get into the habit of not completing their pull during the snatch so they can rush to the bottom of the squat to receive the bar. It feels much faster.

However, as the loads get heavier, they can’t get under fast enough because they haven’t fully extended in the pull allowing themselves to pull under the bar. The power snatch reinforces this triple extension.

If you don’t fully extend during the power snatch, you will struggle to catch the bar high enough to be considered a power snatch.

Corrects The Timing Of The Catch

As mentioned, some Weightlifters fall into the habit of not pulling the bar to the catch position rather just relying on the momentum they have already generated.

This causes the feet to land before the catch or the Weightlifter to dive under the bar. The bar usually comes crashing down on top of them making for an awkward snatch. To get the barbell high enough in the power snatch, it must be pulled which helps correct the timing of the catch.

Train The Snatch With Less Load

As much as you may like to, you can’t snatch heavy every single session (unless you are on the Bulgarian secret sauce with elite genetics). The power snatch gives you a break from heavy lifting while still letting you train the snatch movement.

Which Muscles Does The Power Snatch Work?

Do you want to build a Weightlifters back? Those huge traps and erectors? The power snatch hammers the upper back, erectors, and lower back. But it also works the entire leg musculature from the glutes, hamstrings, quadriceps, to the calves.

I can’t forget the shoulders which have to stabilize the load overhead with a wider grip.

When To Use The Power Snatch

The power snatch can be used as a movement primer before your main snatch session. For example, you can perform power snatches until you can no longer catch the weight above parallel and seamlessly transition to snatches.

Or you can perform light power snatches for your first warm-up weights before transitioning to snatches.

The power snatch doesn't have to come secondary to the snatch. It can also be used as the main movement for your session. Especially after a heavy day of lifting to give your body a break from heavy loads while developing speed.

Finally, beginners will make use of the power snatch as a regression to the snatch. Having to coordinate the barbell moving overhead while squatting is a difficult task. Removing the squat means the beginner Weightlifter can purely focus on the bar path.

How Many Sets and Reps Of The Power Snatch?

Generally, you will perform 4-6 sets of 1-3 reps at approximately 65-85% of your snatch 1RM. The lower percentages are for emphasizing the speed of the lift while the higher percentages, while still emphasizing speed, become more strength-based.

The power snatch can be performed from any of the hang positions to work on certain positions. Most commonly, the hang power snatch is used to reinforce positioning over the bar at the start of the second pull.

The no feet variation of the power snatch is used to reinforce the correct bar path. By planting the feet to the floor, you can’t jump forward to backward to catch a wonky power snatch.

The power snatch from the platform or riser is also known as a deficit power snatch. By elevating your feet, you lengthen the pull. This is an exceptionally good exercise for those that cut their pull short.

By lengthening the pull, the Weightlifter must stay over the bar longer since the bar has to travel further. This feeling is then transferred over to the power snatch or snatch without the deficit resulting in the Weightlifting staying over for longer.