Phalanx Method is designed to test your mind, your body and your soul as you partake in weekly endurance challenges, along with the implemented barbell-based strength training, designed to mimic the trials and tribulations of the finest heavy infantry of the ancient world: the Greek hoplite.

This program, when followed correctly, will turn your body into one that is carved from oak and bronze.

In addition to the six months of science-backed programming, each week comes with a small history lesson; also included in the program is a reading list designed to help you understand what their rigorous training looked like, and a curated music playlist to help push you through the toughest of workouts.

No need to worry about percentages, as this program uses the RPE (Rate of Perceived Exertion) approach so you can get the most out of yourself on any given day. Equipment requirements are standard, and Phalanx Method can be performed in almost any gym.

An excellent program for beginner and advanced athletes, both the garage and commercial gym lifter, Phalanx Method promises to give you the most unique training experience of your life.

Phalanx Method promises to change the way you think about history by dropping you into the middle of the bronze wall of the battle line. Are you ready to train like a hoplite?

Carve Your Body Into A Greek Statue

All three Phlanx Method programs into one massive bundle for 24 weeks (6 months) of challenging training.

Targeted to gain muscle mass and increase tendon/ligament thickness by focusing on keeping blood in the targeted area for the duration of the workout.

Othismos: to drive your enemy off the field with your bronze-faced aspis shield, along with your comrades standing shoulder-to-shoulder with you in the line of battle.

Agoge will test your mind. You will find the most intense Anabasis challenges of the entire program. If you can finish the challenges of this first program, you have a strong chance of finishing all three phases of Phalanx Method. 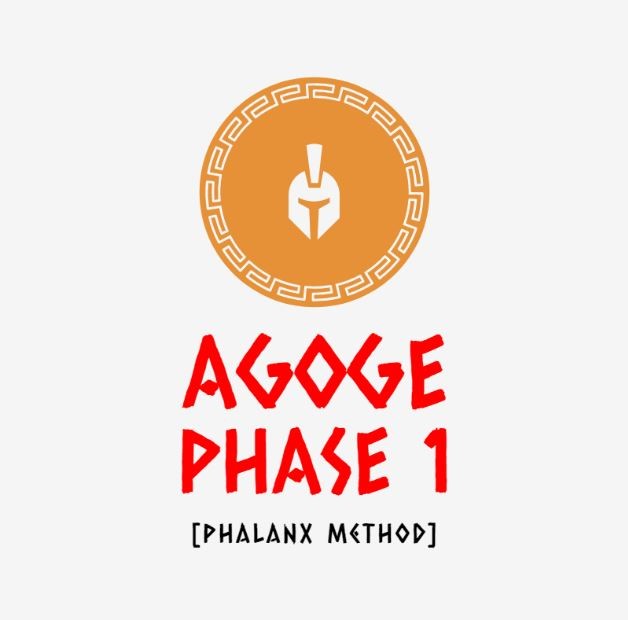 Othismos will test your body. Expect to push hundreds and hundreds of pounds on your sleds, expect your lungs to beg for air, expect your nervous system to be so worn down that you’ll sleep like the dead when you finish each training day. 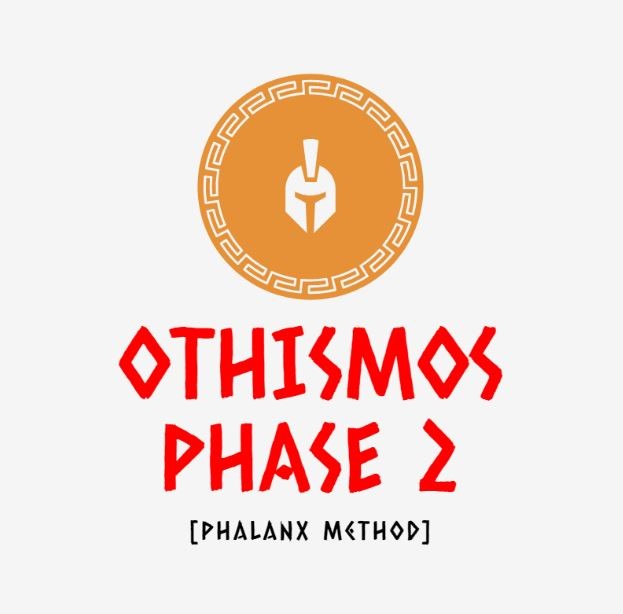 Elysium will test your soul. You will train to achieve the body of a Greek hero, with a still-challenging Anabasis, and much higher volume in your lifting to accelerate muscle growth, definition, and muscular endurance.

What You'll Get When You Purchase Today

You will receive all THREE Phalanx Method, 8 week training programs instantly so you have 24 weeks (6 months) of programming to carve your Greek body.

A Message From The Creator

You are about to embark on a journey that no lifter has ever traveled before: using Classical-era texts, archaeological evidence and legendary myths to achieve an all-encompassing level of fitness.

I am wholeheartedly grateful that you would choose to follow a unique program like Phalanx Method in order to challenge your bodies, minds and souls, to achieve a greater version of the person you were before.

There are few true “Eureka!” moments in someone’s life: a single thought or moment that flicks the light switch of the mind and causes a cascade of ideas and possibilities to pour in, forever changing the trajectory of your future.

Phalanx Method came to me from my moment of Eureka; the flood of thoughts about how to go about making Phalanx Method were all triggered by a single word...

This word, Othismos, in Ancient Greece, meant something similar to the English words “push/shove.”

It was the word used to describe that moment on the battlefield when Hellenic warriors would clash with the enemy, both against foreign invaders, as well as fellow Greeks.

Whether literal or metaphorical, the idea behind the word was to literally drive your enemy off the field with your bronze-faced aspis shield, along with your comrades standing shoulder-to-shoulder with you in the line of battle. Let me give you a little background information on my road to writing Phalanx Method.

My focus in college was historical theology and religious archaeology, although, due to some workaround on my part, I was able to focus many of my credits on Greek history and the history of the Ancient Near East.

This era and geographical location has been one of my main historical interests since before I was a teenager. I dreamt of watching the battle of Troy and seeing Ajax’s mighty shield.

I wanted to stand on the Cliffs of Kallidromos and watch as the Spartans, with their Greek allies, fight to the last man against the Persians. I yearned to watch Alexander as he routed the Sacred Band, the flower of Thebe’s military, at the Battle of Chaeronea.

Naturally, these dreams will most likely not come to fruition. Instead, the best I can do is read the texts, study the archaeological data, and talk with experts in the field regarding their theories about what their lives were like.

I loved college, I would stay in college forever if I could. Unfortunately, that isn’t a reality either. And as a strength coach, people have asked me more times than I can count as to what I can do with my history degree when I am supposed to be fixing someone’s squat depth.

Phalanx Method is how I will use my degree. By using the ancient texts, I have built a complete training program that will attempt to mimic some of the grueling parts of what being a Greek hoplite would be like, without neglecting your modern strength work in the gym.

I have developed this system to accomplish both of these goals at once, which I share here with you now. You will experience what it could have been like to march for hours and immediately be expected to stand in the battle line, while finding a higher level of mental endurance that you didn’t know you possessed.

It is my hope that Phalanx Method will not only help you strive to be the best version you can be, but also to inspire you to read some of these ancient texts yourself. Throughout the program, you will see that each week has a title, with some accompanying text below that serves as the theme for the week.

The purpose of this is to motivate you to see what some of the terms mean, or to look up the context of these passages. I have found that picturing something in my mind’s eye has helped me through some of the more grueling training sessions in my life, and I want the same thing for you.

When you feel like giving up, think of these passages and see if they don’t drive you to take another step, and another after that. In the walkthrough, I have included explanations of the three phases of Phalanx Method, as well as the inspiration behind them.

I am also including a reading list which will include all my sources, both fiction and non-fiction, a music playlist to inspire you to achieve great deeds, and a list of suggestions to help you get the most out of Phalanx Method. Without further ado, let us begin.