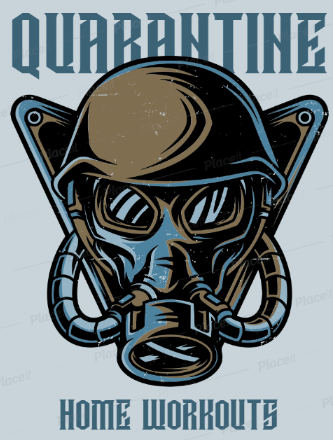 If you're like most of the world and stuck under self-imposed quarantine due to Covid-19 Coronavirus, you may be wondering how you're going to not only work out, but also keep from going crazy in your home.

In these manuals, I have written four days of programming that you can do from the comfort of your own living room.

That is why I have written one manual that uses dumbbells as the sole source of weight resistance, while the other manual uses no weights whatsoever, using strictly bodyweight movements instead.

You can do whichever applies to you. Each program has four days each week, and the program can last you a month, unless you choose to run it again for additional month. The choice is yours.

Train In The Comfort Of Your Living Room

Not everyone is lucky enough to have the space for an epic home gym. Quarantine Home Workouts are planned with a small space in mind.

DB Only & BW Only Options

If you envision being locked down for more than 8-weeks, these programs are easily repeatable so you can smash your old records.

A completely new program to challenge your new-found fitness from Phase 1.

What You'll Get When You Purchase Today

You will receive BOTH Quarantine Home Workouts including 8 weeks of training instantly so you can dominate quarantine.

A Message From The Creator

Following the program – This should be straightforward once you get the hang of it. If the letter in the title of the exercise is followed by a 1, that means the exercise is by itself, and you can rest after.

If it’s followed by the same letter and another number, that means its part of a superset, and you can’t rest until all of the numbers of that letter are completed.

This is laid out also if you look at the REST section, which shows you shouldn’t rest until the superset is completed.

Recording weights – While this program isn’t set up to have you attempt all new 1RMs, you should still notice your strength increasing over the weeks.

Make sure to accurately records all the weighs you use, and how many reps from each set you hit. The goal here is to increase weights on each set on each training day of the week.

Don’t start your first set as a warmup weight though, warm up to a good weight and then that’s when you start writing down your numbers, or you’re going to be leaving a lot of gains on the table.

If you find yourself missing reps, it’s too heavy, and you should decrease weight.