The split jerk is the main jerk variation performed in competition as part of the clean and jerk. It is the ultimate test of power to see how much weight you can drive overhead from your shoulders.

But the split jerk has rules in the sport of Weightlifting. In Strongman and CrossFit, the bar can get to the overhead position by any means possible. In Weightlifting, it must be one fast motion of the arms without a pressing motion.

So how do you perform the split jerk so you can get three white lights at your next competition and why should you use it over other jerk variations?

How To Perform The Split Jerk

The split jerk starts with the barbell in the front rack position. Ideally, you will find this position by taking the barbell off the rack or from jerk blocks. You don't want to power clean your weight unless that is part of the exercise as you’ll be limited by the weight you can jerk and cause unnecessary fatigue.

The front rack position is usually held with the elbows as high as possible allowing you to catch the clean in a big chest position. However, for the jerk, your elbows should point slightly down.

This creates a more vertical line of force from your elbows and up through your forearms to the barbell. Importantly, the legs should be completely straight to give you the maximum benefit of the stretch reflex.

That is simply the ability to quickly turn the downwards to the upwards phase of the dip and to use the elastic energy stored by dipping down to propel yourself and the barbell upward. 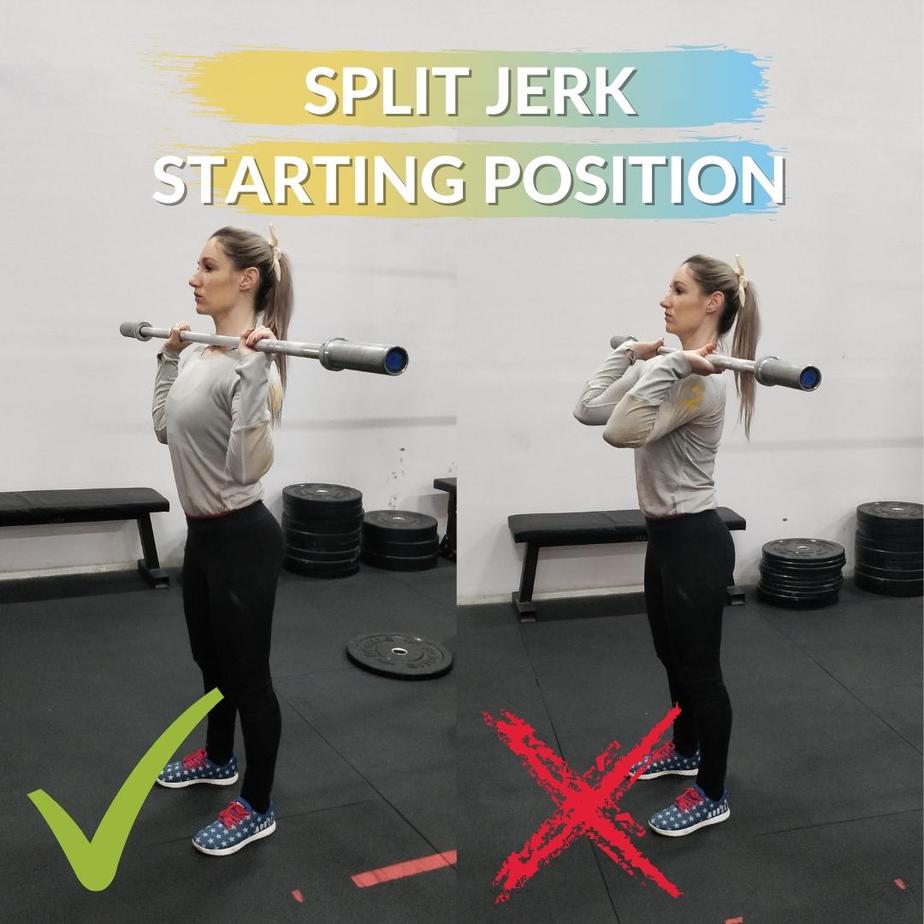 To initiate the dip, your weight should be towards your heels. This will allow you to dip in a straight line. Dip straight down into a quarter squat position. The knees should move slightly out and not just forward to keep the knees and hips under the barbell.

The hips must dip straight down to the floor and not backward.

Think about a rope pulling your tailbone straight down to the floor.

Once you reach the bottom of your dip, you must violently reverse the movement to an upward trajectory. Drive through the full foot and get full extension of the ankles onto your toes. You must drive with the legs and push the arms at the same time. 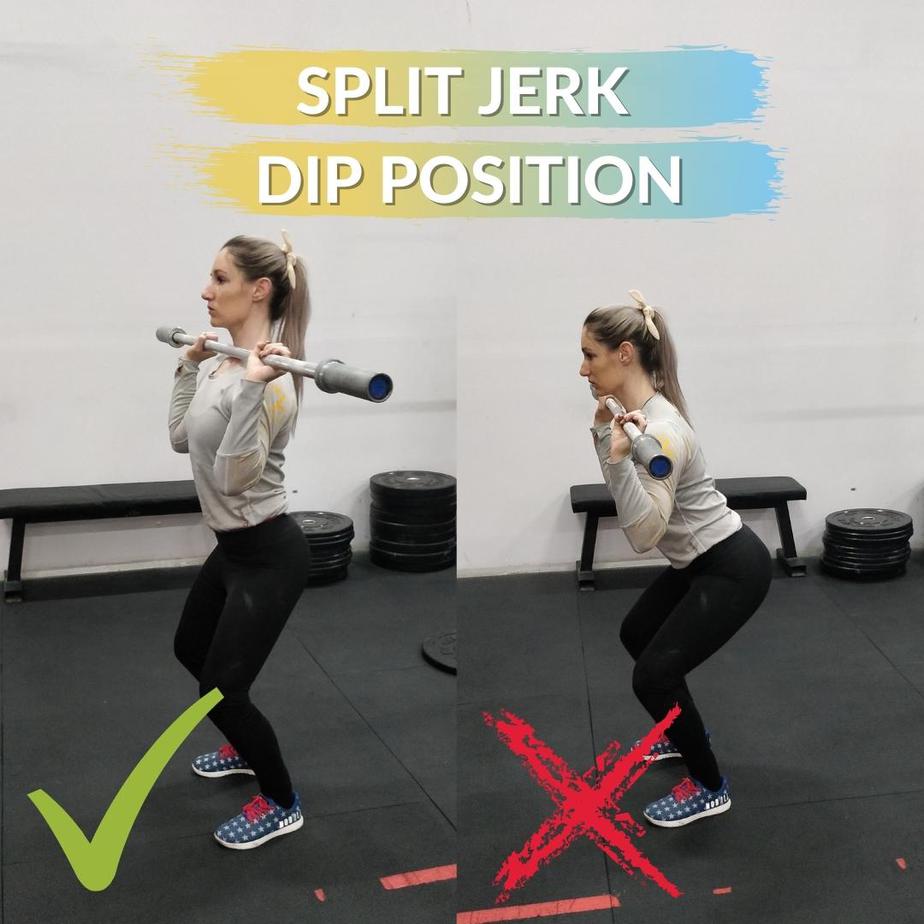 Once you reach full extension of the legs, split your legs with one planting forward and the other behind you. This is the “drive and drop.” It’s important your legs don’t move directly forward and back, but also slightly out to the side to provide you with extra stability during the catch.

The split will result in you “punching” yourself under the barbell with the arms, not just dropping under. That means your back leg will be bent during the catch with your hips directly under the barbell.

Once stabilized in the split position, the recovery starts with moving the front leg back first, then the back leg forward until both feet are in line next to each other. 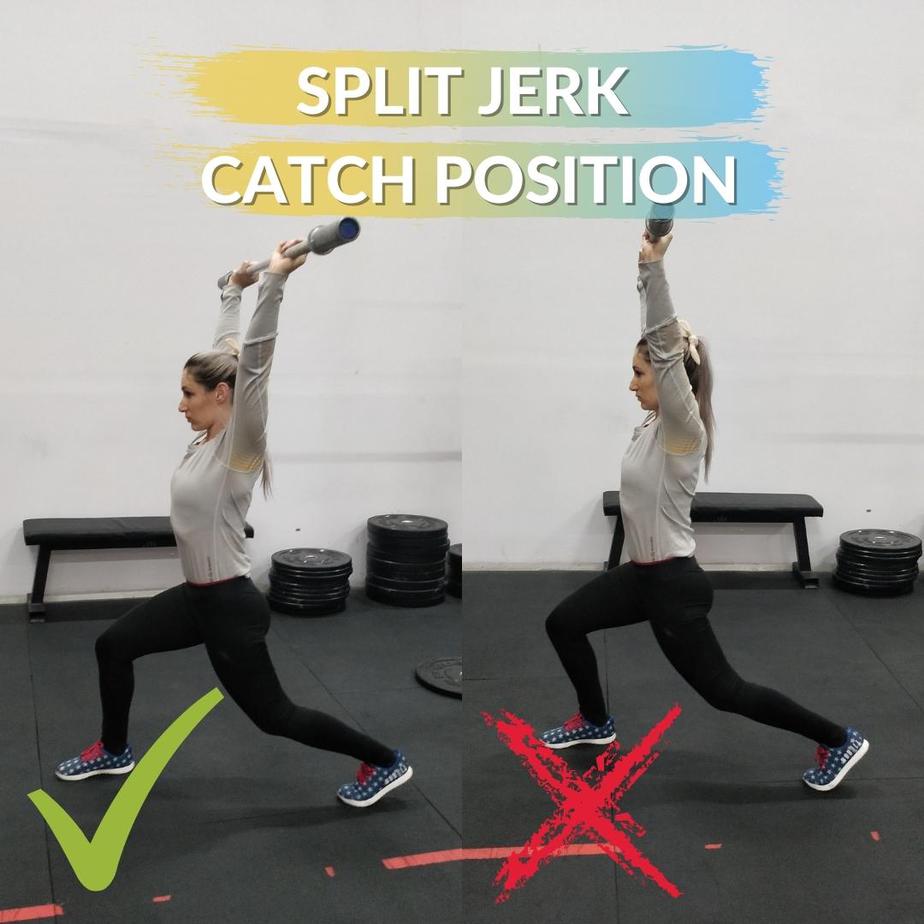 These common split jerk mistakes will be in sequential order from the starting position through to the catch.

Setting Up With The Elbows Too High

While having the elbows high is essential for catching the clean and performing the front squat, the split jerk requires the elbows to point slightly down. By keeping the elbows high, it puts you at a disadvantage as you are in an unfavorable position to impart force into the bar as your forearm is in front instead of underneath.

Starting With Your Knees Bent

By starting the dip with your knees already bent, you’ve cut the distance of your dip in half. It also means you are starting with tension in your upper legs turning the dip from an explosive, elastic movement to a muscular, forced movement.

You will dramatically limit the loads you can jerk if you start like this.

Dipping Forward Toward The Toes

Dipping down onto the toes means you are dipping forward, not straight down. This results in driving the bar forward where the bar can’t be caught or is caught with the hips behind the bar forcing you to chase it.

Dropping Suddenly With The Dip

While your dip and drive need to be violent, the dip itself must be controlled. A big mistake is dipping suddenly which results in separation between your shoulders and the bar.

This separation then causes the bar to crash back down on you as you’re about to drive upward stopping a lot of your momentum.

Pushing the hips back during the dip is a common beginner mistake. Many lifters are taught to break with the hips first when they squat and carry it over to the dip during the jerk. However, the hips must dip straight down during the jerk.

By dipping with the hips backward, you lose the ability to transfer a lot of force vertically as the hips are behind the bar. Further, your back angle is no longer vertical which is likely to propel the bar forward.

Catching The Bar In Front

Catching the bar in front is often a symptom of the previously mentioned mistakes. However, even when the dip and drive are done correctly, some Weightlifters may still catch the bar in front of them. In this case, it's a simple "up and back" cue that can get the bar behind the head.

Stepping Forward With The Back Leg During Recovery

When recovering from the split position, the front foot should move backward first. By moving the back leg forward first, you will potentially end up chasing the bar forward.

Which Leg Should You Split Forward?

Determining which leg you should split forward with when beginning Weightlifting can be difficult. Unfortunately, you can’t just copy your favorite Weightlifter. So here are two ways you can determine your preferred lead leg.

The major difference between the split jerk and power jerk is the catch position. The split jerk splits the legs forward and backward while the power jerk moves the feet slightly out to the side keeping them in line.

If you are unsure which style to learn, always opt for the split jerk as you will be able to lift more weight in this style as you can get lower under the bar. Further, you are more stable in the split jerk position so you have more margin for error compared to the power jerk.

Which Muscles Does The Split Jerk Work?

The split jerk works the quadriceps, glutes, and calves during the dip and drive while the shoulders, traps, and triceps are used to stabilize the bar overhead.

When To Use The Split Jerk

Since the split jerk is part of the competition lifts, you will perform it very often as part of your training. Either as a standalone lift taking the bar from the rack or the jerk blocks and only performing split jerks.

Or as part of the clean and jerk to prepare for competition. If it is used as your main lift for the session, it will be performed first before other exercises.

Whether you take the bar off the rack or jerk blocks is personal preference and equipment-dependent. The only negative to jerking off the rack is having to lower the bar back down to your shoulders each rep which can be fatiguing and difficult. With jerk blocks, you can drop the weight each rep saving your energy for the next rep.

How Many Sets and Reps Of The Power Jerk?

Often you will perform the split jerk as part of your power clean or clean where you will finish each clean with a jerk. However, when focusing on the jerk and performing it on its own, generally you will perform 4-6 sets of 1-3 reps at approximately 75-100% of your clean & jerk 1RM.

The behind the neck split jerk is used to fix the line of the barbell and reinforce dipping and driving in a straight line. If a Weightlifter usually dips forward, having the bar behind the neck will provide a feeling of bodyweight being closer to the heels and will cue the athlete to dip straight down.

Adding a pause to the bottom of the dip serves two purposes:

If you dip forward, you will feel it during the pause and be able to correct it.

Jerk recoveries are performed in a power rack with the bar resting on the pins at a height that is the same as when you are in the split position. You will

The split jerk balance is about driving yourself under the bar so your hips are in line with the bar. Additionally, it trains the ability to drive under the bar quickly and to get the front foot out far enough.

The tall jerk has a few variations in itself such as starting from the shoulders or the forward. It makes a great warm-up exercise to teach you how to get under the bar very quickly. It will improve the speed of your split and the speed of your drop.